Options see greater use in hedging strategies across energy sector

US oil and gas producers have changed how they use derivatives to hedge price risk in the energy markets, cutting back on the overall level of protection and switching to options-based strategies, according to an analysis of public disclosures by Wood Mackenzie, the consulting firm. 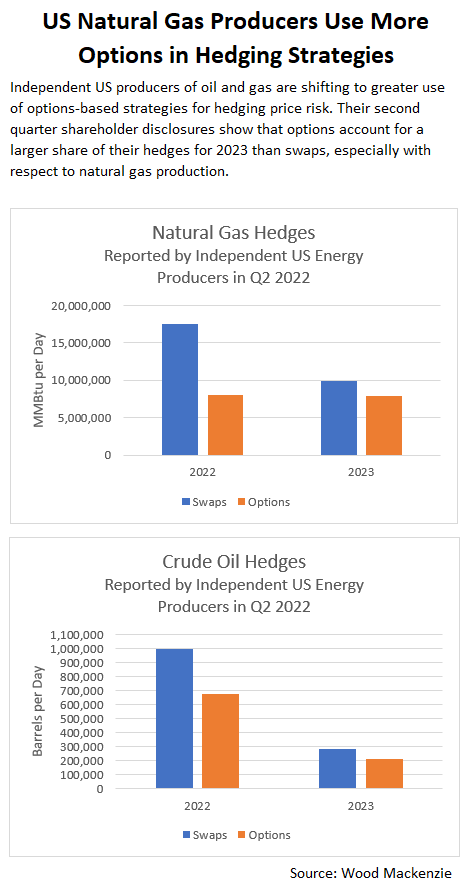 Using data from roughly four dozen independent exploration and production companies operating in the US and Canada, Wood Mackenzie tracks the level of hedging through the use of derivatives. In its most recent report, which is based on data for the second quarter, Wood Mackenzie estimates that these companies have hedged 36% of their crude oil production in 2022. That is down from 44% at the comparable time a year ago, and the lowest level in at least five years. Wood Mackenzie also estimates that 58% of their natural gas production for this year is hedged, down from 73% a year ago.

"One of the key themes we saw this quarter was for E&Ps to right-size their hedging programs," said Frank Lin, a senior analyst at Wood Mackenzie. "After years of deleveraging, their balance sheets have improved, and they have less need to hedge to stay in compliance with debt covenants. Instead, more companies are transitioning to a 'rainy day insurance' approach aimed at protecting free cash flow and dividend payment during periods of low commodity prices."

Looking farther out, independent producers also have reduced their hedges for 2023. In their second quarter disclosures, the companies in Wood Mackenzie's sample group reported hedging only 14% of their oil production and 38% of their gas production in 2023, compared to a 20% coverage level for oil and a 47% coverage level for gas at the same point in time a year ago.

The report also shows that many of these companies are switching to options-based strategies such as "costless collars." In contrast to futures and swaps, which track prices up and down in a linear way, these strategies provide protection if prices fall below a certain price but reduce the potential for mark-to-market losses as prices rise. That allows producers to keep more of the cash flow from increased revenues. Swaps still account for the majority of the volume of production that is hedged, but the share hedged with options is rising, particularly as hedges for 2022 roll off the books and firms focus on their hedging programs for 2023.

Wood Mackenzie's analysis is based on quarterly disclosures to shareholders that are filed with the Securities and Exchange Commission. These disclosures include information about their open derivatives positions, which are primarily over-the-counter derivatives linked to benchmarks such as WTI and Henry Hub. They include fixed price contracts, basis swaps, call and put options, call and put spreads, swaptions, and two-way and three-way collars.

The analysis does not include hedging by the US operations of large integrated energy companies such as BP and Shell or government-owned oil companies such as Equinor. Wood Mackenzie estimates that the independent producers in its sample group account for 25% and 38% of US oil and gas production, respectively.

What is driving the decline in hedging?

Three main factors are driving the decrease in the level of hedging, according to Wood Mackenzie. First, the rise in oil and gas prices has caused existing hedges to lose value. Although the losses on the hedges are outweighed by the gains on sales of physical oil and gas, the trend toward higher prices has prompted these companies to reassess the need to hedge the downside. Some companies have even exited their hedges, even if that requires paying up front to close out the positions.

For example, Pioneer Natural Resources, one of the largest share producers in the US, reported $2 billion in hedging losses in 2021. In January the company said it would spend $328 million to unwind its existing hedges over the course of the year. And its second quarter disclosure showed that the company has no hedge at all for its oil or gas production in 2023.

Second, the shift of the futures curve into backwardation creates a disincentive to hedge. Backwardation describes when near term prices are higher than longer term prices. That makes producers reluctant to sell their oil and gas in advance and miss out of the potential upside. "With prompt gas close to $9 per MMbtu, operators are hesitating to lock in sub-$6 prices for next summer," Lin explained.

Third, an evolution in financial management in the oil and gas industry has reduced the need to hedge to satisfy lenders. Historically, the independents focused on maximizing production and borrowed heavily to finance their operations. When prices fell, they had trouble servicing their debt. Over the last several years, many of these companies have focused on improving their financial condition, using higher profits to pay down debt and boosting their dividends to reward shareholders. That gives them more discretion in how they hedge. According to Lin, many of these companies are being "quite vocal about hedging less as balance sheets have improved."

EQT: Switching from swaps to collars

EQT is one of the clearest examples. The Pittsburgh-based company is one of the largest gas producers in the US. Over the last 12 months, it has altered its hedging strategy, switching from swaps to collars in order to capture more of the potential gain in revenue from higher prices. In an August presentation to investors, the company said that it has hedged roughly 50% of its 2023 production with a combination of collars and puts. The company explained that "balance sheet improvements" allowed it to restructure its hedges so that they provide "downside protection with meaningful upside opportunity."

Collars are options-based strategies that include the purchase of a put and the sale of a call.  The put functions as a floor, providing protection in case gas prices fall below the strike price. The call functions as a ceiling, reducing the potential profit if prices go above the strike price. Although the company gives up some of the upside, the proceeds from the sale of the call helps reduce the cost of the protective put. In fact, many companies structure these hedges as "costless collars" in which the proceeds from the sale of the call cover the cost of buying the put.

Wood Mackenzie's analysis shows that EQT sharply reduced its swaps-based hedges during the second quarter while increasing its options-based hedges. Looking at just 2023, the volume of gas production hedged with swaps fell by almost half between the first and second quarters, while the volume hedged with options increased by more than a quarter. The company went from relying primarily on swaps to hedge its 2022 production to relying primarily on options to hedge its 2023 production.

Another example is DiamondBack Energy, one of the largest producers of oil in Texas. In April the company announced a $285 million loss on its hedges in the first quarter and said it spent $135 million to unwind some of its existing hedges.

In August, the company explained that improvements in its financial position have allowed it to change its hedging strategy.  "As Diamondback’s balance sheet has continued to strengthen, the company’s hedging strategy has evolved to maximizing upside exposure to commodity prices while protecting extreme downside," the company said. In practical terms, that translates to great use of put options and costless collars.

Because Diamondback sells much of its production to customers outside the US, it uses a combination of benchmarks in its hedging strategy. Roughly two thirds of its derivatives are based on Brent, the main benchmark for the international market for crude oil. The remainder are based on West Texas Intermediate (WTI), the reference point for the most actively traded oil futures on the New York Mercantile Exchange, and Magellan East Houston (MEH), one of the main terminals for oil delivered to the Gulf Coast.

Ovintiv: Capturing more of the upside with three-way collars

Still another example is Ovintiv, formerly known as EnCana. The company, which is one of the largest independent oil and gas producers in North America, overhauled its hedge program late in 2021 with the goal of improving cash flow and capturing more of the upside from higher prices. Brendan McCracken, the company's chief executive officer, explained the shift in strategy in an August call with analysts.

"Late last year we did change our hedging policy and pretty substantially," McCracken said. "If you look at our history over the last several years, we've been quite heavily hedged, like three quarters of production hedged. As we saw the balance sheet improving, we saw the need to hedge go down materially. Today we're hedging to manage the risk of a very low period of commodity prices. We want to be able to protect the business against those low prices and still be free cash flow neutral or better after the base dividend. So what you’re seeing us do is hedge about 20% to 25% of production. We're doing it a quarter at a time, four quarters out."

McCracken added that the company is now relying heavily on options-based strategies, including both two-way and three-way collars. In the case of the latter, the strategy involves buying a put to set the floor, selling a put below that floor to reduce the cost of the strategy, and selling a call to set the ceiling. Roughly 30% of its gas hedges for 2022 are in the form of three-way collars, according to the company's disclosures. Another 28% of its hedges are in swaps, and the remainder are in two-way collars and outright call options. For 2023, all of its hedges are three-way collars.