Open interest plummets, however, as traders wrestle with extreme volatility

Over the last five years, the TTF gas futures contract has become the main benchmark for the European gas market and the second-most heavily traded gas contract in the world. Russia's invasion of Ukraine has sparked even more interest in this contract, with trading volume hitting an all-time record in March. 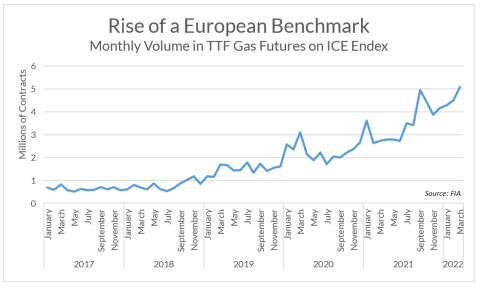 The TTF futures contract, which is listed on the ICE Endex futures exchange in Amsterdam, is based on physical trading of gas on the Title Transfer Facility in the Netherlands, a virtual trading platform operated by Gasunie. Gas traded on TTF is transported through a network of pipelines into various parts of northwestern Europe. The price of gas traded on TTF also has become the main benchmark for pricing liquefied natural gas brought into Europe by tankers from the US, Qatar and other sources, making it an increasingly important benchmark for pricing global flows of LNG.

Europe depends on Russia for 38% of its gas supplies, so the invasion of Ukraine sent a shock wave through the gas market. Even though the initial wave of sanctions against Russia were designed to avoid disrupting the energy sector, European governments have made it clear that they intend to sharply reduce reliance on Russian supplies, and prices skyrocketed amid what some called "panic buying". In the short term, one of the main alternatives is to increase imports of LNG, making the TTF benchmark even more important in the pricing of gas supply contracts.

Even before Russia's invasion, the trading of TTF futures was on the rise. During 2021, trading of TTF futures on ICE Endex averaged 3.47 million contracts per month, more than five times the average in 2017. That reflects its value as a pricing benchmark for physical trading of gas within Europe as well as the growing global market for LNG. Asian countries such as Japan, Korea and China have been the largest buyers of LNG in the past, but Europe has stepped up its imports of LNG as it shifts away from coal, and many of the LNG supply contracts are based on the TTF benchmark.

The International Energy Agency, the inter-governmental organization that coordinates global policy on energy, estimates that the TTF's share of the European physical gas trade increased from 70% in 2020 to close to 80% in 2021. "The TTF is increasingly chosen as a hedging venue both by European and global market players seeking optionality on the European market," the IEA said in its most recent quarterly report. 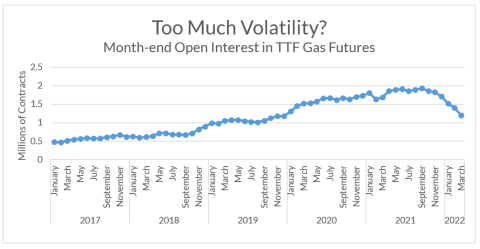 Although interest in TTF gas futures trading has never been higher, the extreme volatility of energy prices is making it more difficult for traders, and open interest in many energy futures has plummeted in recent months.

Open interest measures the number of outstanding positions and indicates the level of risk that is managed. For years the level of open interest in the TTF gas futures rose steadily as more market participants used the contract for risk management. But since the peak in September 2021, when open interest reached 1.94 million contracts, the level has fallen, slowly at first and then suddenly.

The main reason for the sharp drop-off in TTF open interest was the extraordinary level of volatility. That started during the last several months of 2021, when surging demand collided with low levels of gas in storage and uncertainty about supply. According to the IEA, the average TTF price in the fourth quarter was more than six times higher than the same period in 2020, and volatility in TTF month-ahead contracts averaged over 85% in 2021, more than double the ten-year average, and reached an all-time high of close to 200% in December.

That volatility has only intensified in the first quarter, as market participants struggled to gauge the impact of the war on the gas market and assess the availability of alternative supplies. The volatility also has increased the cost of trading. Initial margin requirements set by ICE Clear Europe, the clearinghouse for ICE Endex, have ratcheted higher to cover the increased risk of loss. Several large commodity trading firms have stated publicly that they have been forced to reduce their trading of futures because of the cost of meeting the margin requirements, and some smaller players reportedly have pulled out altogether.

According to the Platts news service, the margin requirement for TTF futures was set at 60% of the contract value as of March 23, five times higher than the rate in September. "It is no wonder that liquidity has started to dry up," a broker told Platts.

October 2022 stats on customer funds held at US FCMs