Blockchain and futures: an industry perspective

Scores of companies are exploring ways to apply blockchain and other forms of distributed ledger technology, the technology that underpins bitcoin, to a wide variety of financial transactions. Yet there has been very little public discussion on its potential use in the listed derivatives markets. In this article, two industry experts--Ray Kahn and Nick Solinger--describe some of the areas where DLT can be applied. They predict that DLT could lead to tremendous efficiency gains, but caution that the industry is not ready to abandon existing systems overnight. The article is based on comments made by Kahn and Solinger during a June 26 webinar sponsored by the FIA Operations Division.

Distributed Ledger Technology has received an amazing amount of attention over the past couple of years. Thought leaders across the capital markets have called it a transformative technology, and more than 250 firms have been launched to apply elements of blockchain to various aspects of finance, including some high visibility firms such as R3, Digital Asset Holdings, itbit, Ripple, Axoni, Circle, Chain.com and many more. Dozens of experiments have been announced to apply DLT to various types of financial transactions, including syndicated loans, repos, foreign exchange options and interest rate swaps. So far, however, relatively little attention has focused on futures markets. In our view, the futures industry is well suited to the types of efficiencies that distributed ledgers have the potential to deliver. The current infrastructure for recordkeeping, reporting, risk management and the payment and collection of margin is extremely robust, but these core functions of the transaction life cycle can be made vastly more efficient if the industry can find a way to apply DLT. This is a new foundational technology that will be applied to a vast range of problems, from the mundane to the transformational. The challenge for our industry is to think about how this technology can solve problems more efficiently than traditional databases, middleware and matching engines. 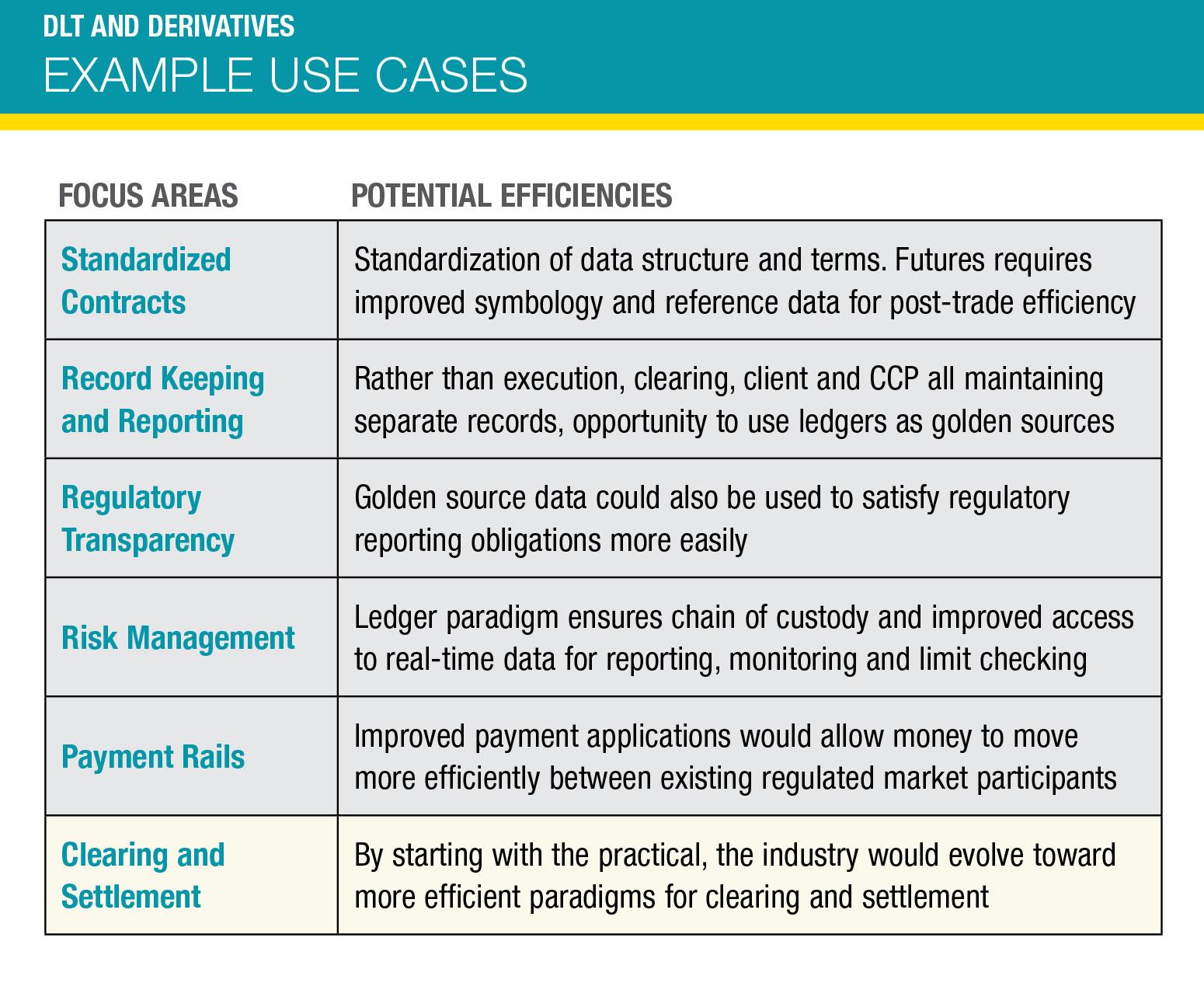 By moving through these layers of standardization, record keeping, transparency and risk management, we end up getting to a world where we can have an efficient real-time paradigm for clearing and settlement.

What are the key elements of this new technology? First, one of the main innovations is the storage of data in a distributed ledger. Think of this as a database in the cloud. This is a very flexible underlying technology that can store any type of data and any type of transaction, without needing a central hub. Second, the technology has a model for verifying transactions without trusted intermediaries, while at the same time preventing transactions from being forged or duplicated. Third, it has a peer-to-peer payment protocol that can be used for any type of payment or transaction. And lastly, this is an open source software initiative, which creates the opportunity for market participants and technology providers to develop innovation solutions on top of the foundational technology. Another innovation closely associated with blockchain is the concept of a smart contract. If the ledger is the operating system, smart contracts are the applications written on top of it. Blockchain was developed for transactions in bitcoin, which are relatively simple payments, but the transaction protocol allows for very complex representations of contracts. For example, there are experiments to record things as complex as syndicated loans and ISDA master agreements in a smart contract. The ledger keeps a historical record of these transactions, and future events, such as the movement of collateral, can be automatically spawned in the ledger by the entities that host it. For example, if a payment is missed, ownership of an underlying asset could revert back to the person who originally owned it. If terms are met on an instrument, such as the strike price of an option, it could automatically trigger the exercise of the option. These are events that could be modeled today in smart contracts. Smart contracts are, effectively, a coding environment that works with a ledger technology.

So how will these technologies be deployed in the futures industry? Let's start by looking at post-trade processes such as the matching of trades and the calculation of margin. The first step is standardization of contracts, so that a common representation across participants can be communicated through a ledger. Futures contracts are standardized to a great degree, but there is a lot of cleanup that needs to happen in order to use centralized utilities because the contracts and the post-trade processes are very specific to individual exchanges. If we want to unlock the post-trade efficiency potential of DLT, the reference data will need to be standardized.

The time frame for these applications to get into a production environment is going to look like any other implementation of an institutional middlewaretype system.

Another area is recordkeeping and reporting, which is a key element of what clearing members do for their clients. Right now, execution, clearing, clients and clearinghouses all maintain separate records. The amount of operational overhead that goes into reconciling all these records on trade day and through the life cycle of the trade is one of the industry’s biggest areas of capacity utilization. If we can move to standardized data and contracts, we can start to use distributed ledgers as golden sources so that everyone sees the same records and the same information.

That could extend to regulators. These golden sources can be used to give the appropriate view to regulators. That could also extend to more advanced things. If we have ledgers that record all the activity, we could have the ability to do risk management in a central way. That could unlock things that have been hard to achieve in the listed market, historically, because of the diverse landscape that we live in today.

Clearing and settlement is another area where DLT can be deployed. This is where a lot of people race to the finish line in discussions about blockchain in the futures industry. But we think clearing and settlement are the end of the story, not the starting point. By moving through these layers of standardization, recordkeeping, transparency and risk management, we end up getting to a world where we can have an efficient real-time paradigm for clearing and settlement. To put it another way, we think this industry will take an evolutionary approach to applying DLT to post-trade processes.

In our view, we are probably within months to a year of seeing a production implementation of a blockchain-inspired technology for basic functions that will inter-operate with existing systems.

The other area where we see great potential for DLT applications is in the payment and collection of margin. There is a lot of work going on in that space and a lot of innovation around digital currencies and digital payments. We do not expect, however, that this industry will jump directly to something that is entirely new. The futures markets have a well-defined system for moving margin that has been in place for quite a long period of time. We do not believe that exchanges and regulators, let alone institutional clients and their clearing managers, are ready to accept digital currency as a form of payment. It's possible that we might get there in 10 years, or even five years. The technology is getting better and better all the time. But right now, we think the most likely path forward is to focus on getting more efficiency into the existing payment rails and the existing post-trade systems.

Keep in mind the complexity of the margining process. It’s not just cash moving between participants; firms are also moving eligible collateral such as Treasury securities, and both elements are inextricably tied to the funding markets. So it won't be enough to simply replace cash with a digital currency. To get to a distributed ledger-based system that can provide real-time settlement and margin functions will require a level of interoperability with the underlying bond and repo markets and the custodians. You also have to factor in netting, which adds another layer of complexity.

So how long before the futures industry starts to deploy distributed ledgers in a meaningful way? If we embrace the notion that this is a foundational technology that people are going to use to build new systems, then in effect the timeframe for the introduction of ledgers and smart contracts is basically tomorrow. That does not mean that we are going to have a futures trade execute and clear by this technology. But could a group of market participants use it for, say, post-trade notifications? Absolutely. They could do it tomorrow, in a permissioned or private implementation, and we have already seen several proof-of-concepts to this effect involving multiple market participants.

We are likely to see a similar evolutionary approach on the payments side. The first step is developing the ability to add messaging into the existing payment networks and provide market participants with more efficient means of accessing those networks. We then might see solutions to provide more transparency on margin movements so that market participants can track movements more efficiently. We also might see solutions that allow for a reduction in the time between payments. It could even give the industry a cost-effective way to offer a higher level of protections for client assets. Those solutions will rest on top of the existing payment infrastructure, performing those processes more efficiently without being disruptive.

The timeframe for these applications to get into a production environment is going to look like any other implementation of an institutional middleware-type system. They will go through a cycle of development and testing with participants. In our view, we are probably within months to a year of seeing a production implementation of a blockchain-inspired technology for basic functions, such as messaging, matching, trade reporting and notifications, which will interoperate with existing systems. As the industry embraces some of these more mundane things, it will help the technology mature, improve and become more trusted over time, and within 10 years, and probably sooner, we will see DLT-inspired applications in most of the areas discussed above.

At some point, adoption dynamics are going to become more important than smart engineering. That is one of the reasons why companies in this space are forming consortia with established players. They are looking to get the right people around the table who can drive the successful, safe, efficient implementation of this technology in a controlled environment.

As with any new technology, we will have to figure out how it fails, when it fails and how to recover from those failures. Most people in IT are familiar with this approach. That is why we go through a robust and rigorous cycle of vetting new technologies, why we deploy proof-of-concepts and pilots, and why we go through testing rounds before we throw things into production. This is a highly regulated institutional market, and that sets a high bar for fully vetting new technology.

As with many exciting new technologies, it will take longer than many people predict to enter this space. But however long it takes, we think the benefits will be enormous. The introduction of distributed ledger technology can help this industry become more stable, transparent and efficient.

June 2022 stats on customer funds held at US FCMs

Viewpoint – Digital assets are the topic in DC this summer