Chicago—FIA announced today that Freightwaves has been named the FIA Innovator of the Year at FIA Expo. Freightwaves will receive more than $20,000 in marketing support, cash and other resources. 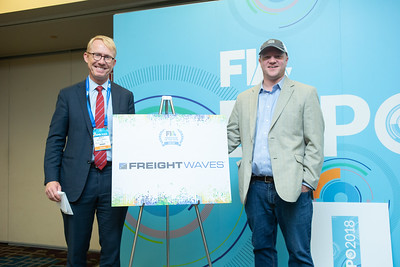 Freightwaves is one of 15 companies participating in the annual Innovators Pavilion at the FIA Expo, an award-winning showcase for fintech startups that is designed to encourage greater innovation in the derivatives industry. More than 45 applications for places in the Pavilion were reviewed by a selection committee comprised of technology experts from banks, trading firms and venture capital firms, and these 15 companies were selected based on their relevance to the derivatives industry and the innovativeness of their products and services.

Five of these companies were then chosen to participate in a pitch competition in which each company presented its solution to a panel of six independent judges with expertise in financial markets technology and venture capital investing. The judges chose Freightwaves as the winner based on its potential to create a new class of futures products and market data based on the rates charged by trucking companies to move goods across the U.S.

“I’m proud to name Freightwaves the FIA Innovator of the Year,” said Walt Lukken, President and CEO of FIA. “Launching a completely new market is a very difficult challenge, but Craig Fuller and his team have methodically assembled many of the core elements necessary to offer futures aimed at one of the most important costs in the supply chain. Freightwaves has the potential to not only expand the range of products that our industry offers but also provide a valuable new risk management service for the real economy."

The FIA Innovators Pavilion serves as a showcase for fintech startups focused on capital markets. Each company chosen to participate receives a free booth on the show floor and an opportunity to interact with more than 4,500 people attending the FIA Expo, the largest trade show of the year for professionals in the listed and cleared derivatives markets.

The Road Ahead for Operations