FIA believes that cross-border fragmentation is reduced by regulatory recognition

London, UK—FIA today released a policy paper outlining seven principles to guide the regulation of cross-border activity in the derivatives markets. FIA is issuing the paper to address the threat of market fragmentation due to conflicts, inconsistencies, and duplication in cross-border regulation. Policymakers and regulators in many parts of the world are re-examining their approaches to cross-border activity, and some are favoring more insulated national policies that favor direct oversight of domestic and foreign entities. As FIA points out in the paper, these national approaches do not defer to home country regulation, and the resulting overlap of regulation on cross-border activity will lead to less efficient markets and higher costs for end-users.

“For the last 40 years, our industry has relied on governments’ willingness to defer to the regulation of other jurisdictions to facilitate these cross-border connections. These recognition and equivalence regimes have worked extraordinarily well,” said FIA President and CEO Walt Lukken. “Yet, this proven system is facing new tests with the EU and UK having just completed their separation, a new administration in the US, and a Chinese market beginning to open to the world. It is critical that we remain vocal about finding the right approach to regulation that enables cross-border activity in our markets.”

In recent months, FIA has observed several developments that have prompted policymakers and regulators to consider increased regulation of entities domiciled in or operating from foreign jurisdictions. These include:

FIA believes that as regulators grapple with these four developments, they should include reliance on comparable home country regulation as a core element of their regulatory response. This model, which has been applied to futures trading and clearing for generations, is a safe and efficient way to regulate entities that operate at a global level and markets that connect buyers to sellers at a global level.

Many jurisdictions already use the reliance model for certain aspects of their cross-border regulation. To encourage greater use of this model, FIA has drafted seven principles to clarify how this model can be applied. These principles are:

“FIA plays an important role in advocating for rational cross-border equivalence regimes that are comprehensive, outcomes-based, and protective of the marketplace. This requires regulators to assess the genuine risk to the home country and determine whether the foreign regulatory regime comparably addresses that risk,” continued Lukken. “This should not be a line-by-line assessment but one that looks at regulatory results and international standards to measure equivalence. This recognition process, combined with robust information sharing, enhanced communication, and close coordination among regulators has helped our global financial system to thrive.”

To illustrate the importance of cross-border activity to the derivatives markets, FIA gathered statistics from five leading exchanges on the percentage of their trading volume that originated outside of their home jurisdictions. As the chart below shows, cross-border trading accounted for large amounts of the total volume. 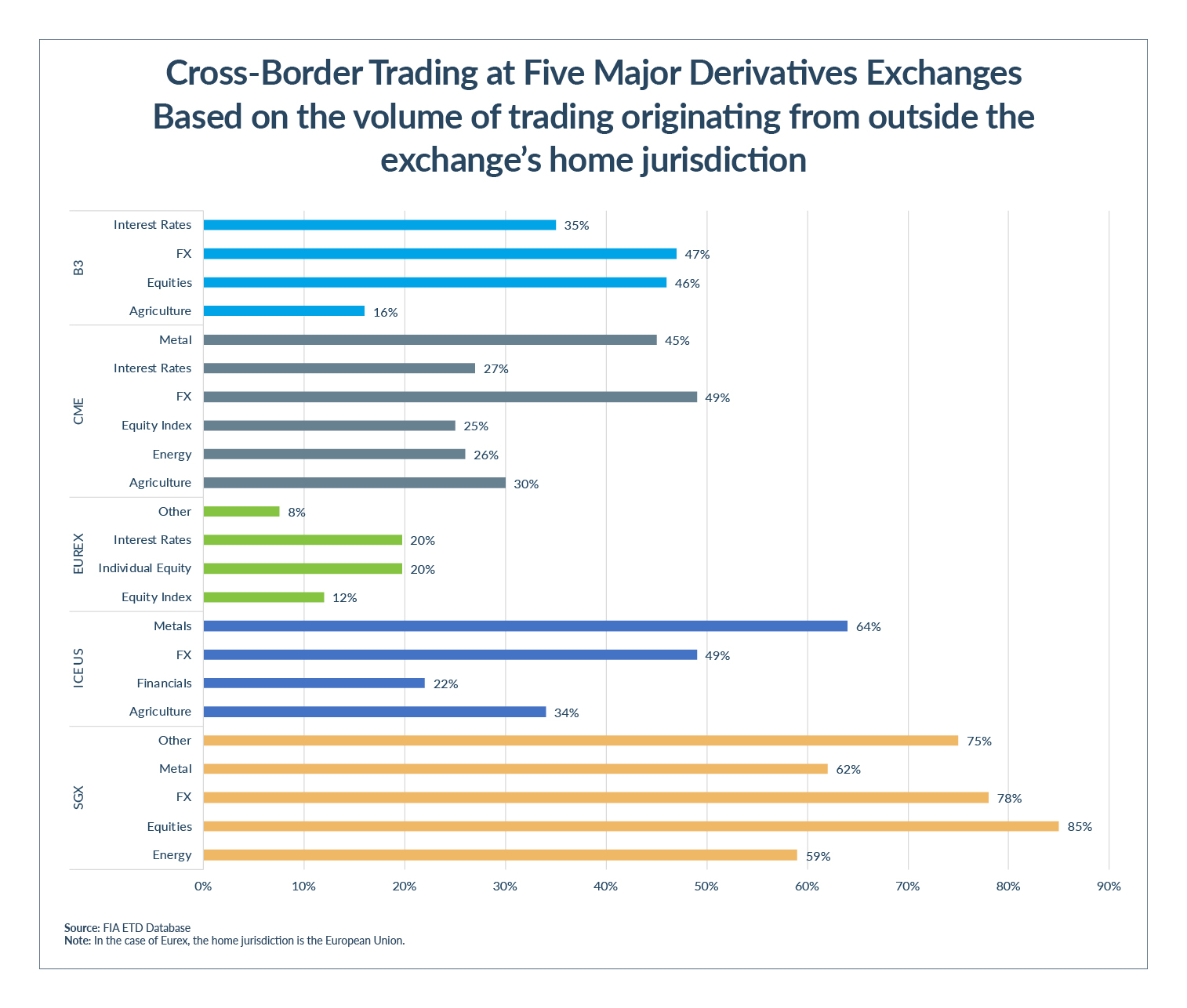 FIA Diversity and Inclusion Efforts in 2021