EU environmental markets have certainty -- and room to grow again

It wasn't long ago many participants in the European carbon markets thought these markets were essentially done. The EU's Emission Trading Scheme was flooded with carbon credits, prices had fallen to a few euros, and the idea of a market-based solution to lower greenhouse gas emissions seemed adrift.

Today, the market is much healthier. Prices have risen by more than 160% over the past 12 months, from less than €5 per ton in April 2017 to over €13 in late April. Trading in derivatives on carbon credits, which are listed on exchanges such as ICE Futures Europe and the European Energy Exchange, has surged in recent months and the notional value of trading has jumped from roughly $5 billion a year ago to about $25 billion in the first quarter.

To those who have been following carbon markets since the inception of the EU ETS in 2005, this is quite a turnaround. One key is political certainty. A year ago, there were doubts about the willingness of European governments to continue with the trading scheme. Those doubts were wiped away in the fall when the European Union finalized an agreement to extend the scheme's life and fix some of its flaws. The agreement, which was approved by the EU parliament in February, essentially did three things: it extended the program to 2030, it tightened the limits on how much carbon companies can emit, and perhaps most importantly it introduced the so-called Market Stability Reserve. Think of the MSR as a sort of central bank for the carbon markets that can stabilize the price by removing excess supply. Under the agreement, the MSR will reduce carbon credits by 24% per year from 2019 to 2023, and then by 12% per year thereafter.

Michael MacGregor, the chief executive officer of Incubex, a business development firm that specializes in environmental markets, said last fall's agreement removed uncertainty about the long-term future of the emissions trading scheme and allowed the market to regain its balance. 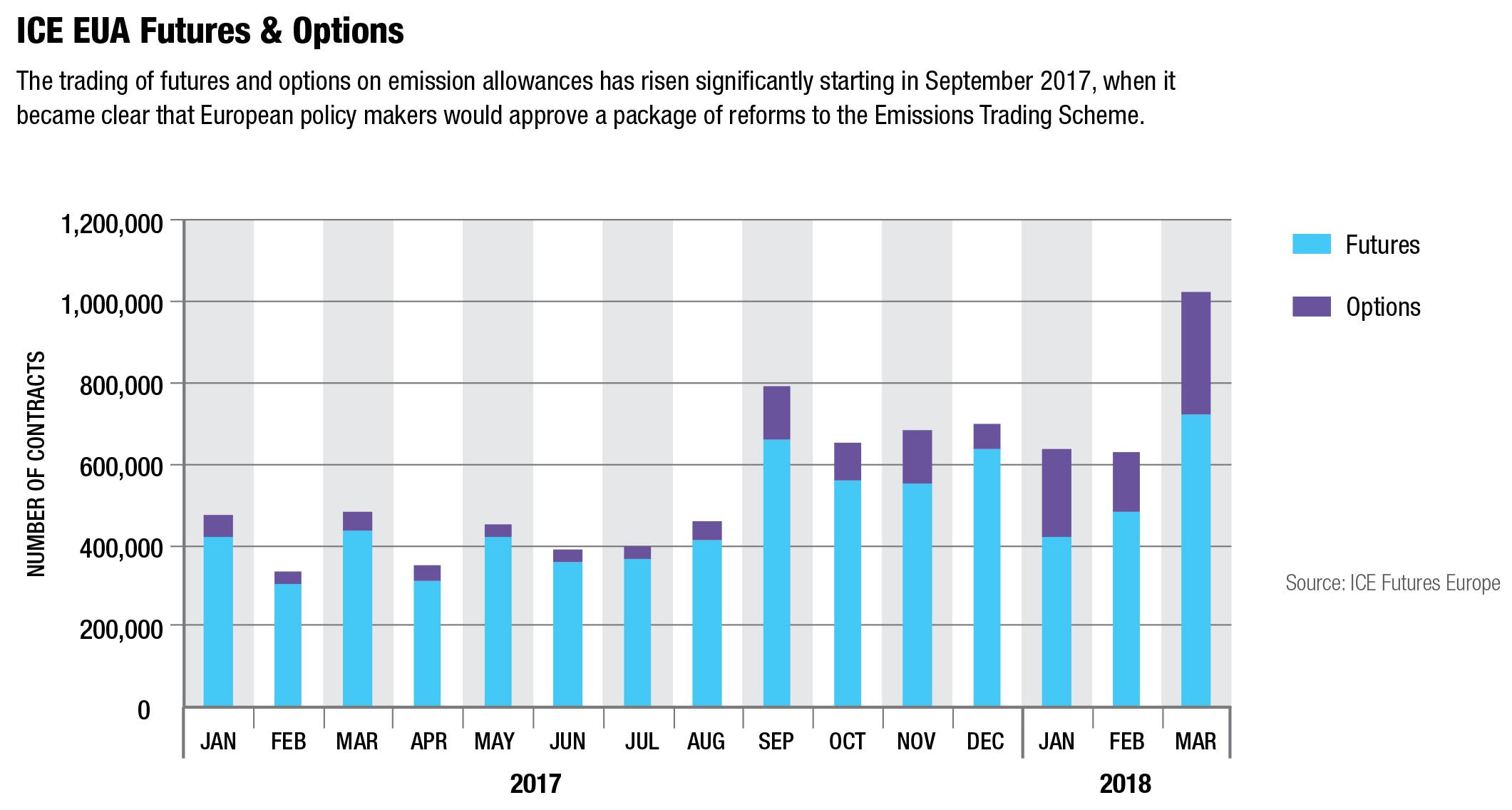 The emissions trading scheme works like this: The European Union sets an overall cap on the total amount of carbon emissions produced each year, as well as individual caps for power plants, airlines, cement producers and other industrial companies operating in Europe. Companies that go above those caps have to buy emission allowances, which are essentially permits to release a certain amount of carbon; companies that go below the caps are allowed to sell their unused allowances. The goal is to create economic incentives for companies to reduce their emissions of carbon into the atmosphere, which is one of the main factors in climate change.“The confidence now in the market, especially with the long-term extension of the EU ETS to 2030, and the measures [that] the European Commission have taken to address the supply-demand of allowances in the market, have helped,” said MacGregor, who has been involved with carbon markets for more than a decade. “We are encouraged by not only the entrance of new participants but also the renewed interest from so many familiar faces we've called clients since 2003.”

The EU ETS was introduced in response to the landmark Kyoto Protocol of 1997, which set emission reduction targets for 37 industrialized countries. The scheme has been renewed twice before, but it has been plagued by a persistent oversupply of allowances that depressed the price and undermined the program's effectiveness in reducing pollution. Now that the requirements have been tightened up and the oversupply problem has been addressed, companies are reentering the emissions derivatives market to lock in the cost of these allowances. With the current supply set to be reduced more than 60% from 2019 to 2023, the expectation is that prices will continue rising. Some forecasts go as high as €25 per ton in 2020, almost double the current price.

ABN AMRO is one of the banks that provides clearing for emissions derivatives. Rob Alexander, who heads the bank's corporate hedging business in Europe, the Middle East and Africa, said the changes to the EU ETS have created more demand for hedging among corporations and utilities as they look ahead to complying with the tighter carbon environment in the coming years.

“There were a lot of questions in recent years over whether or not the EU Emissions Trading Scheme was fit for purpose and whether it was even going to survive,” Alexander said. “We have a lot of clients in the gas and power markets and they are now looking to hedge that [cost] in the carbon markets. The structural changes in ETS have also brought financial participants back into the market.”

Virtually all trading in these derivatives is cleared, but a significant percentage is not executed on the exchanges. According to statistics published by Trayport, 56% of the emissions trading in March was executed on exchange. The remainder was negotiated bilaterally, typically by brokers, and then given up for clearing. A very small percentage—less than 5% in the first quarter of 2018—remained uncleared.

ICE, which entered this market in 2010 when it bought the Climate Exchange, has the largest share of the EU emissions derivatives market. Its EUA futures volume in the first three quarters of 2018, which includes both on-exchange trades and cleared-only trades, was up 38% from the first quarter of 2017. Its EUA options really took off, with volume and open interest up 373% and 291% over the same period.

ICE's main competitor is EEX, a subsidiary of Deutsche Boerse that is based in Leipzig. The exchange offers emission futures and options and also operates one of the main primary markets for the auctions that the EU uses to allocate the allowances. EEX estimates that its platform does about 90% of the overall auction volume in Europe.

Peter Reitz, the chief executive officer of EEX, said sentiment in the carbon space has developed very positively over the past months. EEX carbon volumes were up 165% in April compared to a year ago and its March 20 auction had 32 participants, a record number.

“There is clearly renewed interest in the market,” said Reitz. “This demonstrates that the political reform measures have set out the EU ETS on a future-proof path and that trading participants put increased trust in this market.”

The new EU ETS program also dovetails with the Paris Accord, the latest global climate change agreement, which was signed by 195 United Nations members in 2016. Yet even with the MSR, the EU ETS will fall short of meeting the emissions reduction goals in that agreement. The European Commission plans to draft a proposal in 2019 to bring the EU into compliance with the Paris Accord. That potentially could make the ETS market even tighter in terms of credits.

For exchanges and market participants, it has been a challenging decade. Gordon Bennett, managing director for utility markets at ICE, said the carbon markets have survived the worst of times and are now seeing strong levels of liquidity, volumes and participation.

“The interesting thing about [these] markets is how resilient they have been,” Bennett said. “Despite the many headwinds these markets have experienced over several years, the more than 200% appreciation in carbon prices experienced in Europe since May 2017 has led to significant levels of participation and volume growth as old participants return and new participants enter the market. The options market at ICE in particular has witnessed significant growth during this period.”

Bennett summed it up: “Carbon is getting interesting.”