By Kirsten Hyde and Will Acworth

LCH SA, the Paris-based clearinghouse within the London Stock Exchange Group, has expanded the range of contracts that can be cleared through CDSClear, its clearing service for credit default derivatives. The move is part of LCH's goal of ramping up its share of the European credit derivatives market and expanding its CDS clearing services to US-based members and clients.

On 24 March, the clearinghouse announced that it has added credit index options to the list of contracts that can be cleared for hedge funds, asset managers and other clients. It also announced that BNP Paribas and JP Morgan were the first banks to take advantage of the new service, with more banks expected to follow over the course of this year.

Officials at CDSClear said the expansion of its client clearing service will enable a wider group of market participants to access the capital, risk management and operational efficiencies that are available through clearing. These include multilateral netting, which reduces gross bilateral counterparty exposures down to a single net exposure to the clearinghouse and reduces operational risk by enabling a single expiry and exercise instruction per instrument.

"As the first US bank to offer client clearing via LCH CDSClear, we’re delighted to support credit index option client clearing at CDSClear," Forgan said in the LCH announcement. "Clearing provides our clients with an efficient way of mitigating counterparty risk with additional operational benefits. This new service from LCH expands those benefits to credit index options and increases the netting opportunities available to our customers."

CDSClear first launched options on two major European credit indices, the iTraxx Europe Main and Crossover indices, in 2017 and expanded its offering in 2020 to include options on two North American indices, CDX.NA IG and CDX.NA HY. Its primary competitor, ICE Clear Credit, introduced clearing for these products in 2021.

"LCH was the first credit clearinghouse to offer credit index options and since launch, we've built up a significant liquidity pool in that product," said Frank Soussan, global head of CDSClear.

In 2021, CDSClear cleared a record €163 billion of notional in iTraxx options, representing a year-on-year increase of 133%. According to LCH data, 77% of all global credit index options clearing activity is now processed at CDSClear.

The notional amount is likely to increase further this year as phase six of the uncleared margin rules comes into effect in September. It is estimated that 1,100 buy-side firms will be covered by this phase. Under the UMR rules, contracts that are not cleared by central counterparties are subject to initial and variation margin, hiking the cost of bilateral exposures. This is expected to incentivise more clients to adopt central clearing.

Intercontinental Exchange, which clears credit derivatives in London through ICE Clear Europe and in New York through ICE Clear Credit, was the first to offer CDS clearing and continues to have the largest share of the market.

Most of its volume goes through ICE Clear Credit. The New York-based clearinghouse offers the widest range of cleared products, including not only North American and European but also Asia-Pacific and emerging market indices and single names. In 2021, ICE Clear Credit handled more than 80% of all cleared CDS volume, according to data published by ICE.

Despite being in the US,  ICE Clear Credit has attracted an increasing amount of business in euro-denominated CDS. In the fourth quarter of 2021, it cleared $3 trillion notional of iTraxx index CDS, almost two-thirds of the total amount cleared in that product. One key factor is that it has regulatory recognition from the European Securities and Markets Authority, which allows dealers and clients in the EU to use it to clear their CDS trades.

London-based ICE Clear Europe, on the other hand, has lost traction. Its share of euro-denominated CDS clearing has fallen as clients have moved to either ICE Clear Credit in the US or LCH SA on the continent. LCH SA, which has been growing rapidly over the last five years, has emerged as a meaningful alternative in Europe, particularly in the clearing of European index and single name CDS. 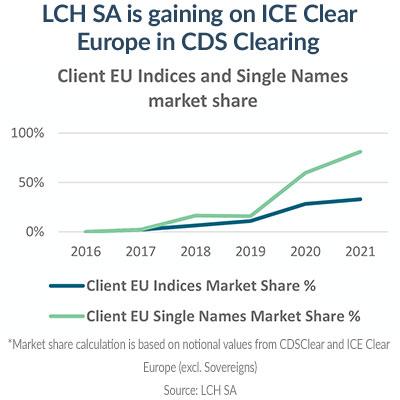 Putting the two European clearing services side by side, LCH SA's share of the iTraxx indices and European single names has climbed to 38% and 48%, respectively. And in the client clearing segment, CDSClear now has a 33% share of client cleared notional volume in iTraxx indices, up from 28% in 2020 and 11% in 2019. It remains smaller than its London-based competitor, but it is gaining ground.

The clearinghouse has been especially successful in the clearing of European single name CDS. It currently offers clearing for CDS on more than 300 European corporations, of which 120 cannot be cleared anywhere else. LCH SA estimates that in 2021 it had 81% of the client cleared notional volume in European single names, up from 60% in 2020 and 16% in 2019.

"We have a broad product scope in terms of single names. From the get-go, our strategy has been to clear all the single names that are constituents in the index. As a result, we have seen a growing number of hedge funds focused on single name credit choose LCH as their clearer, mainly because it's easier for them to clear everything they trade in one place," said Soussan. "These clients have accentuated the growth in our single names market, and year-to-date in 2022 our market share stands at 83%."

CDSClear has also set its sights on expanding its offering to US-based clients, clearing firms and dealers. The move will boost competition in a business dominated by ICE Clear Credit, which launched client clearing for single-name CDS in 2013 and currently has more than a 95% share in dollar-denominated CDS clearing.

"We have all the regulatory authorisations in place to be able to clear for US members and US clients and it is one of our objectives to expand our service into the US," said Soussan.

"We have a global product offering and we have built a business that is not just a challenger but a true alternative in Europe. We now want to go for a global client base, which is a natural consequence of our success in Europe."