This past March, a group of venture capital firms and banking organizations led by BNP Paribas invested $30 million into Digital Reasoning, a privately held company based in Nashville that is emerging as one of the leaders in using artificial intelligence to analyze human communications.

The funding round, which also included Barclays, Goldman Sachs and Nasdaq, is the latest example of the growing collaboration between AI and Wall Street. Banks, trading firms and exchanges are exploring ways to use this technology to enhance the ways they process data and make decisions. And they are partnering with specialist firms that can apply the techniques of AI to the particular characteristics of financial markets.

In the case of Digital Reasoning, the application is in the area of surveillance. The company works with natural language processing, or NLP, a form of artificial intelligence that interprets human language. DR's approach goes beyond words and their direct meaning; its software interprets the context around language and detects the intentions embedded in human communications. When those intentions are problematic—for example when two traders make plans to manipulate a market—the software can alert supervisors and prevent a crime before it occurs.

"DR's approach goes beyond words and their direct meaning; its software interprets the context around language and detects the intentions embedded in human communications. When those intentions are problematic—for example when two traders make plans to manipulate a market—the software can alert supervisors and prevent a crime before it occurs."

The company's original focus was military intelligence, working with the U.S. Army and intelligence agencies to sift through enemy communications and anticipate attacks. The company’s technology also has been used to improve healthcare and combat human trafficking. In 2012 the company expanded into the financial sector, working with some of the top names on Wall Street to help enhance their surveillance of trader conduct.

This is an urgent problem for the banking industry. Since the financial crisis in 2008, regulators have imposed billions of dollars in fines on investment banks for rigging Libor and other forms of trading misconduct. In many cases, the regulators used the emails and chat conversations among traders as evidence of the wrong-doing. The banks are now using AI to scan those same internal communications searching for signs of rogue traders and other types of problematic activity.

So how does this new technology work? How do machines understand the jargon of the trading desk and detect the intentions behind the words? Digital Reasoning provided a window into this new field at a recent meeting of the Commodity Futures Trading Commission. On Feb. 14, Tim Estes, the company's founder, gave a 30-minute presentation at a meeting of the CFTC's technology advisory committee. The committee is an industry-driven panel that makes recommendations for CFTC policymakers and helps the agency make sense of technology trends. It is often through the TAC that the CFTC is first introduced to new financial technologies.

Estes explained that Digital Reasoning’s software specializes in unlocking the nuances of internal communications. Rather than search for specific words and terms, as current “lexicon-based” systems do, Digital Reasoning’s software looks for familiar patterns or tell-tale anomalies and makes inferences from the context. The technology can take chunks of communication and, by comparing it to past conversations, “figure out what’s similar even when none of the words match,” he said.

Estes, who started the company in 2000 when he was still a student at the University of Virginia, noted that common frauds such as price fixing and manipulation typically are not carried out by one person. Digital Reasoning’s technology “can find very subtle indicators of intent" inside communications and pre-empt nefarious activity. "It’s a very unusual thing for an action to happen before someone expresses intention,” he told the advisory committee.

One of the most important sources of data for Digital Reasoning's system was the archive of enforcement actions at the CFTC, Estes said. By making a large volume of trader communications public, those enforcement actions have provided Digital Reasoning with many examples of bad behavior. Another important source actually predates the financial crisis; Estes said one of its best databases for bad behavior came from Enron, the energy company that collapsed amid accounting fraud in 2001.

During his presentation, Estes displayed several examples of trader communications from CFTC records to demonstrate his company’s capabilities. He showed how his technology can sift through the texts, make inferences, and detect signs of boasting, deception and collusion. Even seemingly innocent statements such as “Ok, but what sort of level do you want to push it to?” can trigger an alert, he said. He added that one of the remarkable patterns of behavior in these cases is that people will do something problematic and then brag about it in their conversations with other people.

Many banks already have large teams of surveillance analysts scanning their internal communications, but AI-based solutions are vastly more scalable. This is critically important given the amounts of email, chat and other communications happening every day in a major banking organization. Another advantage is that these systems have infinitely scalable memory, Estes said. Anything that the system learns is available forever because unlike humans these systems never forget. “When this works the way it should, almost nothing that happened in the past that is a problem should happen again,” he said. The software “should see with perfect recall what has happened in the past” and alert compliance officials that it is recurring. 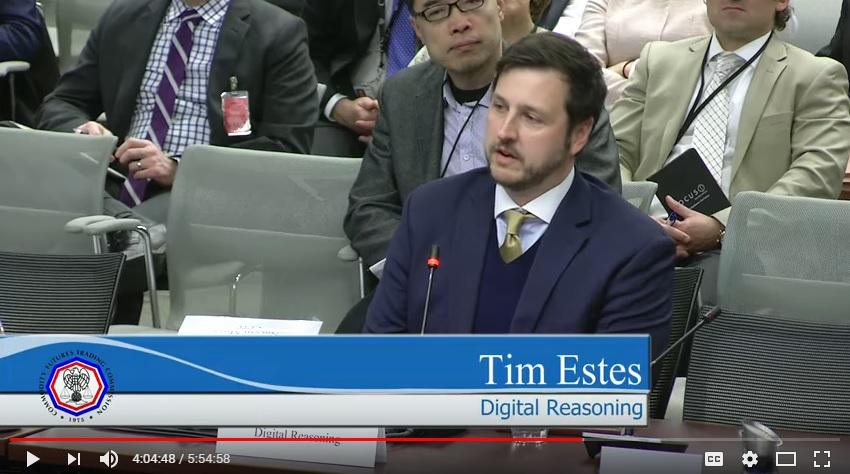 Military intelligence and trader surveillance are not the only areas where the company is applying its software. Healthcare is another area with massive amounts of human communications. Digital Reasoning is working with several healthcare systems to combine data from many sources, including patient records and handwritten medical notes, and build a comprehensive picture of individual patients. That can help health care professionals assimilate more data and improve their decision making.

The company is also working with Thorn, a non-profit organization, to combat human trafficking. Its software is helping law enforcement agencies in the U.S. to sift through huge amounts of online ads, photos and other publicly available data to generate intelligence about victims of trafficking and the individuals and networks involved in trafficking. Instead of searching for certain keywords, Digital Reasoning's software can extract information from the context, seeing past the efforts of human traffickers to avoid certain words or deliberately distort the spelling. The software makes it far easier for law enforcement officers to identify trafficking victims and help stop abuse.

Energy Markets: Overlap and distinctions between CFTC and FERC regulation and enforcement