Every day millions of futures contracts change hands on exchanges around the world. The vast majority of those trades are processed smoothly and efficiently, but not always. A small but not insignificant number run into a snag somewhere in the post-trade process, typically because of a mismatch in the details of the trade, which leads to delays in settling the positions into the right customer accounts.

This has been a persistent problem for many years, but rooting it out has proven to be difficult because the processing workflow is extremely complicated. There are many different entities involved in futures trading and dozens of different technology systems and messaging formats used across the industry.

Two years ago, when the Covid crisis burst into the financial markets, frustration with this problem reached a boiling point. The combination of record-breaking numbers of futures transactions and the shift to work-from-home led to severe backlogs in trade processing at several brokerage firms, which in turn caused a cascade of delays across the industry. The backlog was resolved within a few days, but it required the back office teams to spend many hours sorting through the trades and resolving the errors.

Although that perfect storm has now passed, many firms have decided that collective action is needed to revamp the industry's operational foundation. Working through FIA, experts from asset managers, clearing firms and clearinghouses have come together around a plan to establish standards for post-trade processes in the futures industry. An independent standards body is now being formed that will guide the development of industry standards. The expectation is that the adoption of these standards will lead to more automation in the workflow, a reduction in errors and delays, and a better customer experience.

The firms involved in this process include several asset managers that are among the largest users of exchange-traded derivatives as well as leading futures brokers and clearinghouses.

Gary Saunders, global head of prime derivatives services at Barclays, was one of the first to call for an industry-wide effort to tackle this issue. "March 2020 created a lot of stress for the industry," he said in an interview with MarketVoice. "It exposed the frailties of the futures clearing model. This is not a new problem, but for the first time the stars aligned."

Shortly after the turmoil of March 2020, the FIA's board of directors formed a task force to consider ways to address this issue. That led to the formation of an advisory group that consulted with more than 25 firms in the industry. In November 2021 FIA issued a report that set out a roadmap for promoting greater standardization in how trades are processed.

The initiative has started by focusing on one part of the post-trade workflow – give-ups and allocations. This part of the workflow is critically important to asset managers that need to allocate positions to customer accounts at more than one clearing firm. Typically the asset managers provide instructions to the brokers that execute their trades, and it then becomes the job of the executing brokers to transfer the positions to the clearing firms so that they can be allocated to the right customer accounts.

Why these standards first?  Delays in the give-up process cause problems farther downstream in the workflow that are difficult and time-consuming to resolve. These delays may not be common, but many market participants have flagged this area as one of the most critical pain points in the post-trade process. Getting industry-wide agreement on timing windows therefore could be a valuable first step for the standards initiative.

Joanna Davies, a managing director at OSTTRA, one of the technology vendors involved with the initiative, welcomed the proposed standards and said the timing is "absolutely right." Davies, who spent more than 20 years working in the futures industry before moving to the technology sector, cautioned that adhering to these deadlines will require the community of participants to support an "evolution" in trading processes.

It's not uncommon for brokers to execute a trade a bit at a time throughout the day and then send allocation instructions at the end of the day, she explained. That creates "bottlenecks" in the give-up process, she said, and can lead to problems when the clearing firm pairs positions to accounts without the full transparency of allocation information. She added that there are pragmatic solutions in production today, which leverage common trade order IDs, that can increase accuracy and efficiency in the allocations process.

Lisa Cavallari, head of derivatives trading at Russell Investments, has been involved in this initiative since its early phases and strongly supports the drive for greater standardization. Russell is a very active participant in futures markets, with more than $1.0 trillion in notional value traded in 2020 on behalf of its institutional investor clients and its own investment funds.

Cavallari pointed to the industry-wide operational disruptions that occurred in March 2020 as a key motivator for the firm's involvement. Russell uses multiple clearing firms and multiple clearinghouses. When give-ups were not completed on the same day as the trades, the delays created a "huge operational burden" that carried over for weeks.

"We urgently need some minimum standards to address the pain points in operations," she said. "Give-ups and allocations are a natural place to start. We need to bring these processes into the 21st century."

One reason for delays in give-ups arise when the customers and their clearing brokers differ on the details of an order, such as the price or quantity. This kind of mismatch can arise when an order is placed over the phone or entered manually, or when the average price is calculated in different ways.  Another source of delay is when clients, executing brokers and clearing firms are using different systems and there is a mismatch on message type, contract symbols, or price format.

Why is this so critical? Delays and errors cascade because much of the workflow in the futures industry is sequential, with the details of a trade passed forward multiple times through multiple systems before final settlement.

Joseph Pozzi, global head of listed derivatives operations at Goldman Sachs, explained that the heart of the problem is that there is no standard timeline or consistent format for instructions to brokers. As a result, there is a lot of risk outstanding at the end of the day because the instructions have not been fully implemented. This problem is not new, but it became much more obvious when trading volume skyrocketed in March 2020, he said. Trades sat with executing brokers for extended periods of time, clients were not whole, and the margin requirements were not correct. "Once a give-up has been delayed past the trade date, it's very hard to catch up," he added.

An analogy could be the lost luggage problem in the airline industry. The vast majority of suitcases arrive on time at their destination, but a small percentage end up at the wrong airport, and getting those suitcases rerouted to the right place takes lots of extra time and effort. This is hardly a systemic risk to the airline industry, but it causes immense frustration for customers, and in some cases significant disruption to travel plans.

In a similar way, delays in the give-up process can cause a small number of trades to fail to reach the ultimate destination in customer accounts. What makes the situation in the futures industry more complicated is that allocations require transfers from one company to another, which would be similar to a suitcase checked in by one airline transferred to another before arrival at the destination. In an environment where every firm is using its own system for tagging the trades, it is easy to see why errors creep into the process.

Participants in the standards initiative say that the longer term goal is real-time processing of give-ups and allocations, but given the current limitations on industry technology, setting 30-minute deadlines is viewed as a good place to start.

Setting a standard is of course only the first step. Getting broad adoption will be a challenge. But Saunders said customers are very supportive of this approach. "The engagement with clients has been excellent," he said. "I am pretty confident that they will agree that the standards make sense."

On a more general level, the move towards greater standardization will pave the way for more automation in post-trade processing, he said. That will reduce the number of errors, reduce operational risk, and improve the customer experience. Saunders also emphasized that the goal is not to define what type of technology should be used to meet these standards, but rather to create a "framework" that guides all the parties involved in the trading process.

Pozzi noted that when Russia invaded Ukraine, the futures industry saw another spike in trading volume, but far fewer problems in processing. That reflected improvements made by many firms and exchanges across the industry, but he cautioned against complacency. The interconnected nature of the trading and clearing process means that problems at one firm can affect many others. "We're only as good as the weakest link in the chain," he said. "That's why we need standards – to make sure this improvement is sustainable." 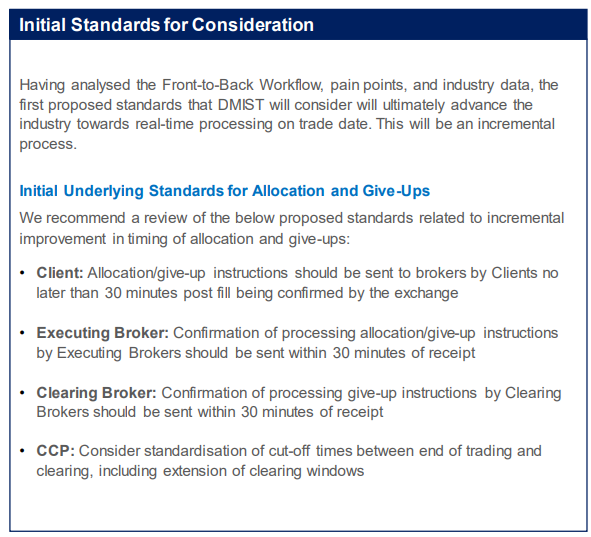