Wayne Arden has spent much of his career focused on the application of technology to finance. He has worked for IBM, OMX, and Nasdaq, where he was head of market technology sales for the Americas. He currently works as an independent consultant, focusing on financial markets.

The derivatives industry is moving quickly to adopt new technologies such as artificial intelligence and big data that are disrupting the way that firms process information. Exchanges, trading firms, end-users and intermediaries are investing millions of dollars in these new technologies and deploying them to achieve greater efficiency and competitive advantage.

There is another set of new technologies that could prove to be just as disruptive if not more. A revolution is happening in the transportation industry as electric vehicles come down in cost and rise in popularity. Tesla blazed the trail, but others are following fast, and auto industry analysts predict that within a decade, global sales of electric cars and trucks, often referred to as EVs, will overtake sales of traditional vehicles that rely on the internal combustion engine.

This presents the derivatives industry with both challenges and opportunities. As the world transitions to EVs, there will be a corresponding rise in the need for electricity to recharge all those batteries. Futures and options based on electricity are today a rather specialized and underappreciated corner of the industry, but in the coming years they will become much more important. On the other hand, crude oil futures and options will lose a large chunk of their appeal as the use of EVs curtails the need for gasoline and diesel fuel. In fact, if we also consider the impact of related trends such as the rising use of renewable sources of energy and the increasing pressure to reduce emissions from fossil fuels, it is hard to avoid the conclusion that electricity is poised to replace oil as the world's most important energy commodity.

For some industry veterans, this may seem like an outlandish forecast, but it is hard to overestimate the impact of electric propulsion on the transportation industry. In fact, some analysts are predicting that this technological advance will be equivalent in scope to past transitions from kerosene lamps to electricity, sailing ships to steam-powered ships, and steam engines to the internal combustion engines that are used today in millions of cars and trucks around the world.

There are several visionary companies leading the way, but the firm at the tip of the spear is Tesla. By relentless focusing on innovation, Tesla is steadily dismantling the advantages of gasoline and diesel-powered vehicles: purchase price, driving range, charging time, and charging convenience. At present Tesla is only a niche producer in the overall auto market, but its sales are rising rapidly and its technology strategy is being emulated by nearly all of the major manufacturers. VW for example expects that by the year 2025, 25% of the vehicles that it produces will use electric power. 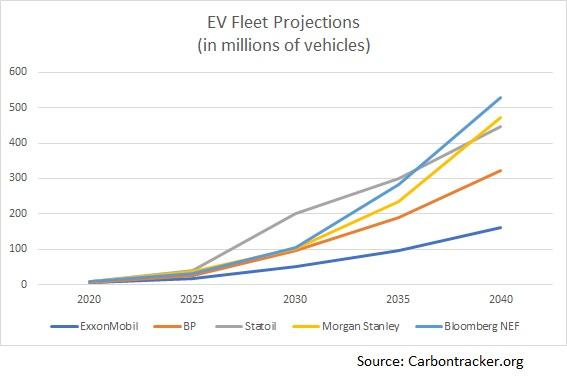 How soon will the EV disruption be obvious? Soon. According to Bloomberg New Energy Finance, a research group, the number of internal combustion engine vehicles sold per year is expected to start declining in the mid-2020s as EVs take an ever-larger share of the market. J.P. Morgan's auto analysts predict that EVs, including both hybrids and fully electric, will account for 30% of all vehicles sales by 2025 and 60% by 2030.

Many analysts believe that the technological tipping point will occur when the price of a battery pack, the most expensive component of an EV, declines to $100 per kilowatt hour. At that price point, the operating profit margin related to selling a median-priced light vehicle in developed countries will be the same for an EV as its traditional counterpart. According to McKinsey, the consulting firm, battery pack prices have dropping faster than anyone expected, from $1,000 per kWh to $230 per kWh. Tesla has been at the forefront of this trend, and Elon Musk, its chief executive officer, has predicted that his company will hit that $100 mark by 2020.

One long-term implication is that rising EV use will depress demand for gasoline and diesel fuel. This will have knock-on effects for the entire petroleum industry. According to the Energy Information Administration, a branch of the U.S. Energy Department, the U.S. transportation sector in 2017 accounted for 71% of the nation's petroleum consumption, equating to 14 million barrels per day. At $70 per barrel, that works out to $307 billion dollars a year.

The oil industry has taken notice. Major players in the oil industry are factoring the rise of electric vehicles into their long-term forecasts and concluding that the global demand for oil will start to level off within the next 10-15 years. At the FT Commodities Global Summit in March, Jeremy Weir, the chief executive officer of Trafigura, one of the largest oil traders in the world, predicted that global oil demand may start to "plateau" in 2025 and go into decline after 2030. He warned that "it may happen quicker than you think," and he pointed in particular to the large size and rapid growth of the EV industry in China.

At present, the displacement effect on oil demand is very small. A recent study by the Argonne National Laboratory, a research center supported by the U.S. Energy Department, estimated that EV use in the U.S. offset 320 million gallons of gasoline in 2018. That was equivalent to just 0.2% of the total amount of gasoline used in the U.S. that year. If the EV industry continues on its current path, however, the displacement effect will increase rapidly. Carbontracker.org, a think tank that analyses the impact of climate change on financial markets, has created an interactive online tool for modeling EV's impact on oil demand out to 2040. The tool, which allows users to select model inputs from multiple sources, suggests that under most scenarios, the displacement effect will cause large disruptions to global oil demand in the near term. 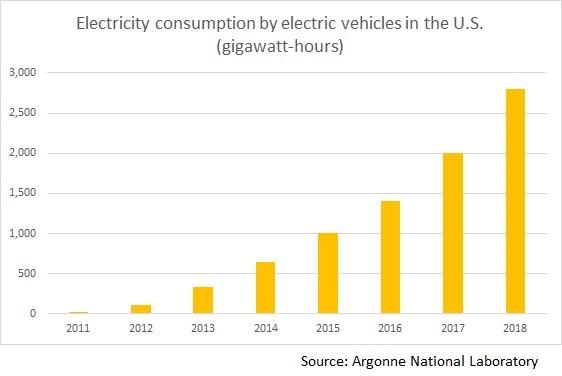 These scenarios are based on projections of the future size of the global EV fleet and assumptions about how many miles those vehicles are driven. As chart one shows, those projections vary considerably, with oil industry analysts at the lower end and auto analysts on the higher end. An alternative approach is to use data published by Tesla on the number of miles driven by the cars it produces, which the company collects via the software in each vehicle. Although this is a more limited data set, it has the advantage of being a more precise way to estimate oil displacement, and it suggests that the EV effect will be at least 2 million barrels per day by 2026. By comparison, ExxonMobil's oil production in 2018 averaged 2.3 million barrels per day. [Author's note: a more detailed discussion on how Tesla's data can be used to model the EV effect on the oil industry can be found here.]

What are the implications for the derivatives industry? Inevitably, as businesses shift the risks they are hedging, there will be winners and losers in the risk management business. Futures and options on crude oil are currently the world's most actively traded energy contracts, but over time their primacy will be challenged by the rising importance of derivatives based on electricity. Several exchanges already offer these derivatives, but no clear winner has yet emerged.

Second, demand is rising exponentially for battery minerals such as lithium, cobalt and nickel. This is creating new opportunities for the industry to offer its expertise in price discovery and risk management. The London Metal Exchange was the first to move in this direction. It has formed an "EV Metals Advisory Group" to connect with industry participants and it plans to launch a cash-settled lithium contract in the fourth quarter of this year.

In addition, exchanges have the opportunity to develop critically needed international standards and processing audit trails—a traditional exchange role. The Democratic Republic of the Congo supplies more than 60% of the world's cobalt, a key mineral in battery production, but many consumers are concerned about the conditions under which cobalt is mined. Responsible sourcing standards are the answer, and it is worth noting that LME has proposed barring cobalt from the exchange's warehouses if the suppliers do not comply with responsible sourcing standards by the end of 2020.

Although EV purchases and battery manufacturing are accelerating in Europe and the U.S., the largest opportunities will occur in China. China's BAIC and BYD are two of the largest producers of EVs in the world, and there are tens of other Chinese firms in hot pursuit. China's strengths in battery production are equally impressive. China's CATL is one of the world's largest lithium-ion battery manufacturers, challenging LG Chem, Panasonic, Samsung, and others. Bloomberg New Energy Finance estimates that China will produce 70% of the world's EV batteries by 2021.

The Chinese futures exchanges are well positioned to respond. They already list contracts on a long list of industrial materials used by China's vast manufacturing sector, and battery metals are a logical extension. Furthermore, they are likely to enjoy strong support from the government. Chinese officials have made it clear that the government wants price discovery for strategic commodities to occur in China, and the battery industry is a core part of the government's ambition to dominate the global EV market.

Most of the global oil market's main benchmarks are based on prices from futures markets in London and New York. That was one of the reasons behind the recent launch of crude oil futures in Shanghai; the government's hope is that this new market will give rise to an Asian benchmark for crude oil.

With the shift from oil to electricity, however, China starts at roughly the same point as the West and in fact it may be farther ahead. Given the considerable production and usage of EVs in China, its commodity exchanges could develop their own benchmarks for battery minerals and other materials used in the production of electric vehicles. And if the Chinese car manufacturers start to compete on the global level, Western companies may find themselves looking east for price discovery rather than the other way around.

Use of petroleum will have a very long tail; consumers and businesses will require oil for decades more. However, it is rarely a good idea to invest large sums of money in a declining market. The derivatives industry should take steps now to profit from the EV disruption that is just over the horizon.