The surge of interest in Bitcoin and other cryptocurrencies has attracted the attention of the world’s leading derivatives exchanges. At least two such institutions—CBOE and ICE—are working on ways to create new products designed to enable investors and others to gain exposure to this emerging asset class and manage volatility by partnering with leaders players in the cryptocurrency market. In addition, a New York startup, LedgerX, has won approval from the Commodity Futures Trading Commission to offer options on Bitcoin and expects to launch trading before year-end.

The growing interest comes as little surprise. Trading in cryptocurrencies has increased substantially in recent years. Five years ago, the total outstanding value of Bitcoin, the most popular of these digital assets, was under $1 billion. Today, the figure stands at nearer $50 billion, with the total for all cryptocurrency tokens standing at around $100 billion.

While that growth rate is impressive, actual usage in the real economy pales into insignificance when compared to traditional currencies. At a Bank for International Settlements meeting earlier this year, Mojmir Hampl, Vice Governor of the Czech National Bank, commented that payments made with Bitcoin amount to just a small fraction of transactions in the Czech koruna, a currency used by a mere 10.5 million people. He also noted that Bitcoin’s global market cap also constitutes only a fraction of even the Czech money supply.

That scepticism has been common place among most of the leading players in the financial markets. While many financial institutions see value in blockchain, the technology underpinning the trading of cryptocurrencies, caution surrounding the currency itself appeared to restrict the appetite of traditional financial market participants.

The tide now appears to have turned, however, in part due to the rise in both the value and volatility of Bitcoin. In September 2016, Bitcoin was trading at $572. One year later, it had risen to more than $4,500, then plunged back below $4,000.

With such volatility comes the need for financial products that can provide access to the market without the need to own the currency itself, and, by extension, an opportunity for regulated markets and intermediaries to step into this emerging marketplace.

The first wave of interest among exchanges came in 2015 with the development of Bitcoin indexes at CME Group and New York Stock Exchange. In May 2015, CME took an initial step in the cryptocurrencies market, launching its CME CF Bitcoin Reference Rate and CME CF Bitcoin Real Time Index in partnership with London-based firm, Crypto Facilities, using data from a number of global Bitcoin exchanges in Asia, Europe and North America. NYSE, owned by ICE, launched its own cryptocurrency index at approximately the same time. The NYSE Bitcoin Index includes data from transactions from Coinbase Exchange, the US-based Bitcoin exchange in which NYSE has a minority investment.

Regulators are taking note of this growing activity. One of the first to take concrete action was the Commodity Futures Trading Commission, which has classified Bitcoin as an "exempt commodity" under the Commodity Exchange Act rather than as a currency. Exempt commodities are defined as “a commodity that is not an excluded commodity or agricultural commodity” that includes metals, energy and weather events. This precludes Bitcoin operators from relying on regulatory exemptions for certain FX transactions under the CEA.

The CFTC has issued a number of enforcements against firms trading cryptocurrencies for violating CFTC rules, but it has also authorized trading platforms providing Bitcoin products. The most significant development has been its decision this summer to allow LedgerX, a New York-based startup backed by Google Ventures and other venture capital investors, to operate a trading venue and a clearinghouse for derivatives based on digital assets such as Bitcoin. LedgerX plans to start with puts and calls and day-ahead swaps, and plans to use blockchain technology for the physical settlement of transactions in Bitcoin. Access will be limited to "eligible contract participants," which effectively limits participation to institutions such as hedge funds and broker/dealers and to high net worth individuals with at least $5 million in assets.

in May 1972 represented a landmark event in the history of derivatives trading—expanding the asset classes on which derivatives were based to include financial instruments—the beginning of trading on LedgerX later this year will also be a historic milestone.” For market participants considering the use of distributed ledger technology, he added, “this is an opportunity to see how it works in practice, rather than in theory.”

The CFTC has issued a number of enforcements against firms trading cryptocurrencies for violating CFTC rules, but it has also authorized trading platforms providing bitcoin products

LedgerX’s Chief Executive, Paul Chou, also called the CFTC approval a milestone for the digital currency market more broadly. “This will pave the way for others globally to look at the space and the appropriate way to regulate a new market like this,” he said.

In August, CBOE announced an agreement with Gemini Trust Company that put Bitcoin derivatives even more firmly on the map. The two organizations unveiled an exclusive Gary DeWaal, financial services attorney at Katten Muchin Rosenmann, which represents LedgerX, noted the significance of the regulatory approval. “Just as the launch of currency futures global license agreement to use Gemini’s Bitcoin market data for cash-settled Bitcoin futures to be traded on CBOE Futures Exchange, which is currently the home of CBOE's futures on volatility.

Under the terms of the agreement, CBOE will have a multi-year exclusive global license permitting it to use Gemini's market data, including Gemini daily Bitcoin auction values, in the creation of Bitcoin derivatives products for listing and trading. The two companies said they are aiming to launch their first products late in 2017 or early in 2018.

"I don't think we need to spend too much time attracting market makers. They're already connected to ourplatform, and they're already actively trading in the cryptocurrency market.”
Chris Concannon
CBOE

Ed Tilly, the chairman and chief executive officer of CBOE, said the exchange was “responding to the growing interest in cryptocurrencies through the creation of Bitcoin futures traded on a regulated derivatives exchange, with the many expected benefits that this brings, including transparency, price discovery, deep liquidity and centralized clearing."

Tyler Winklevoss, chief executive officer of Gemini, added: "Gemini's key concerns in the cryptocurrency ecosystem have always been security, compliance, and regulatory oversight. By working with the team at CBOE, we are helping to make Bitcoin and other cryptocurrencies increasingly accessible to both retail and institutional investors."

CBOE President and Chief Operating Officer Chris Concannon explained that the new product has the opportunity to touch a broader set of investors and clients because it solves the issue of storage that has so far kept some investors out of the market. He also suggested that listing Bitcoin futures would create another opportunity for the market maker community active in exchange-traded markets. In the view of market makers, said Concannon, Bitcoin "is just another instrument in the foreign exchange market." He added that some CBOE market makers are already trading Bitcoin on the various exchanges and predicted that they will support the new product. "I don't think we need to spend too much time attracting market makers," he said. "They're already connected to our platform, and they're already actively trading in the cryptocurrency market.”

Further evidence of the growing credibility of cryptocurrencies is the development of exchangetraded funds in Bitcoin. A number of investment firms are planning to offer exposure to Bitcoin prices through ETFs. Among them are VanEck, which plans to launch an actively managed ETF that will invest in Bitcoin-linked instruments, and REX Shares, which plans to launch a fund that will invest in derivatives and other financial instruments based on cryptocurrencies. The key issue is whether the Securities and Exchange Commission will allow them to come to market. 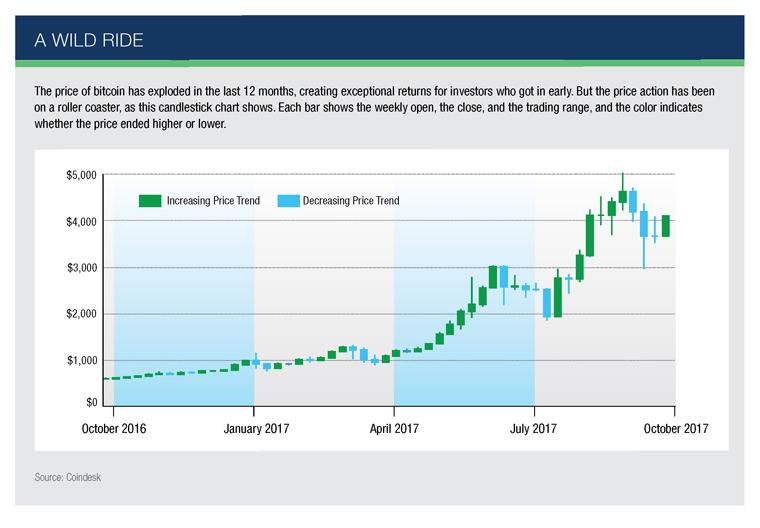 Not everyone is quite so bullish, however. CME has opted against introducing Bitcoin futures, at least for now, even though it has been publishing an index of Bitcoin prices for more than two years. Bryan Durkin, CME's president, told Bloomberg in September that Bitcoin is "very nascent right now" and added that he did not expect CME to go forward with a futures contract "in the very near future."

Instead CME is pursuing a different strategy. Since November 2016 CME has been working with the Royal Mint in London to develop a digital token based on physical holdings of gold. The plan is to use digital ledger technology to support this new product, with the goal of giving customers more security and transparency than the existing spot market for gold. In effect, this project is all about creating another digital currency, rather than a derivative based on existing digital currencies.

With such developments, alongside the products emerging from major exchanges, Bitcoin and other such cryptocurrencies will likely move beyond the preserve of the dedicated few to a wider audience.

Isn’t it just software: Does my technology-based service or product trigger any regulatory obligations?

Chicago derivatives firms gather for golf and a good cause

EU's Fit for 55: What it means for derivatives markets