In November, CME Group will become the first futures exchange to require a tag on order messages that identifies the execution method—a major milestone in the industry's efforts to standardize trading and reduce a persistent source of friction in brokerage settlement.

The move is the culmination of almost a decade of work by FIA and FIA Tech to create a standard set of codes to identify widely used methods for executing trades. Those methods range from fully automated algorithmic trading to human-to-human interaction over the telephone. Once these codes are added to order messages, clearing brokers will have visibility into how orders are executed. That is particularly important when clients use one firm for execution and another for clearing.

"When a trade is executed by one broker and given up to another for clearing, the execution method is not passed on and the clearing broker has to perform a bunch of work-arounds to effectively guess how the trade was executed," said Mark Davis, senior vice president and head of strategy for FIA Tech, the technology services arm of FIA. "Those might work a reasonable percentage of the time, but you do get a lot of breakdowns, particularly during the roll, where the clearing broker and the executing broker don't agree on what brokerage should be charged." 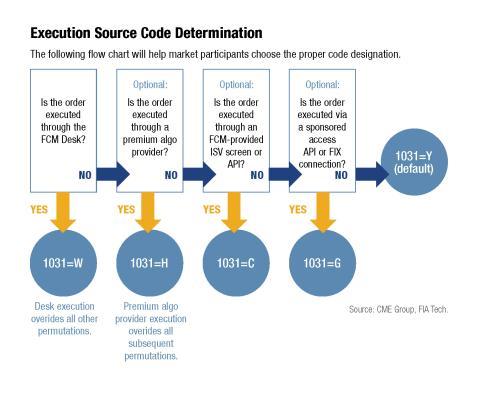 Davis estimated that "at least 20% of the issues in brokerage are marked down to disputes around the clearing broker having no idea how the trade was executed."

On Nov. 17, CME's Globex electronic trading system will help solve that problem by requiring and validating FIA-developed execution source codes as part of all futures and options transactions. Executing brokers will insert one of six different category codes into a field in the FIX order message known as "tag 1031." That tag will allow the execution source to be tracked across the lifecycle of the trade, and will provide a standardized method for identifying how a transaction was executed.

Two other market operators, Intercontinental Exchange and Eurex Group, also support the initiative. ICE has added the codes to its system and Eurex is on track to do so next year. But unlike CME, ICE and Eurex have not made usage mandatory.

FIA and FIA Tech first attempted to tackle this challenge back in 2010, but the original source code schema was not as well-documented the first time around. In 2018, in response to renewed interest in addressing this issue, FIA Tech offered new technical guidelines that were more robust and created in partnership with major exchanges and brokers. Those guidelines were released in December 2018 along with a white paper describing how the codes should be used.

At the same time that FIA Tech was refining its tag 1031 guidelines, market participants were increasingly realizing that in-house fixes had significant limitations.

"A decade ago, we were out pitching to clients how much cleaner we could be at booking their brokerage," said Erik Barry, director of prime derivative services at Credit Suisse. "That was something heard repeatedly back then, that my broker just couldn't charge me correctly, so initially we solved that in our own way. It was a selling point for us."

Barry pointed out it is hard to win customers on that value proposition in the brokerage business these days. And given the wide proliferation of execution services, platforms and providers, "even if we make it cleaner for one client, it’s a fragile, single-broker solution that can easily get messy again with a change in service providers," he said. "You get to an inflection point where it becomes less about solving the problem just for a client’s flow at Credit Suisse and more about solving problems for our clients across their entire industry workflow, and we think that mindset resonates positively with client relationships," Barry said.

CME’s initial rollout of execution source codes is proof of how the derivatives industry can come together and solve problems collectively. However, market participants point out that making the codes mandatory on one exchange is only the first step in ongoing standardization efforts.

“JPM strongly supports the CME decision to make 1031 tags mandatory, and stresses the importance for other exchanges to follow suit,” said Peter Ward, global head of futures and options electronic execution at J.P. Morgan. “Consistent use of tag 1031 across the industry will strengthen industry tools such as Accelerate to allow timely straight-through brokerage settlement without any rate disputes or client involvement. This initiative goes to the heart of an industry-wide brokerage issue, and we’re in favor of consistently applied protocols that work to reduce operational inefficiency."

Accelerate is an FIA Tech project to build a new settlement platform to support the calculation, invoicing and payment of transaction-based fees. The platform, which is being developing in partnership with eight exchanges and clearinghouses, is another example of the industry's drive for greater efficiency in post-trade processing.

"Initially, we actually advocated for a wider variety of codes, but we saw it was important to at least get something off the ground and start seeing some value," he said. "However, there's definitely an opportunity to expand the codes going forward and get more granular after this initial launch, with an eye towards growing the industry collaboration to include trade identifiers and thereby allow greater specificity and further benefits to allocations and average pricing."

Davis at FIA Tech agreed that more work remains to be done on the execution source codes as well as other industry-wide standardization efforts.

"This is a great example of the industry coming together with FIA and FIA Tech helping to guide participants to a solution that we all can agree as the right thing to do," Davis said. "These are just the first steps in an industry standard, but we've definitely brought people together to get momentum that we can build on from here."

The Road Ahead for Operations