For some equity index futures, initial margin requirements have doubled in 2020

Collateral demands remain elevated even as volatility has subsided

By Will Acworth and Jeff Reeves

When markets become more volatile, derivatives clearinghouses raise their initial margin requirements as a protection against default. But when volatility hits a record—as it did in March when the COVID-19 pandemic created risk and uncertainty around the world—the resulting surge in margin requirements can put clearing firms and their clients under stress.

The equity index futures markets were particularly hard hit by this phenomenon. Both the size and frequency of the margin increases demanded by the clearinghouses, also known as central counterparties, was unprecedented, with the requirements for some contracts roughly doubling in size in less than a month.

In cleared derivatives markets, all transactions must be backed by collateral—known as "initial margin" or IM—that functions as the first line of defense in case of a default. The amount of IM is based on estimates of potential loss in the short-term, typically one or two days for futures and five days for cleared swaps. Those estimates are derived from both the current level of price volatility and historical data on extreme price movements.

It is not unusual for clearinghouses to increase initial margin requirements during periods of market stress. But the turmoil that took place in March, when equity markets crashed and then rebounded in an exceptionally short period of time, prompted a rapid increase in the amount of initial margin for certain equity index futures over just a few trading days. 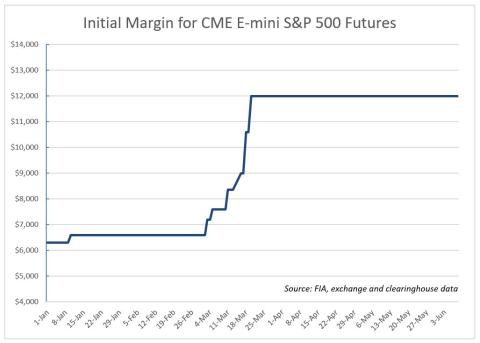 One example was the E-mini S&P 500 futures contract, the flagship of the equity complex at CME Group and the most heavily traded equity index futures in the US. The IM requirement began the year at $6,300 per contract and by March 2 it had risen to $6,600. Then the pandemic hit, and over the next three weeks CME's clearinghouse increased the IM requirement six times as its margin model reacted to the extreme price movements during that time. By March 23, IM had been raised to $12,000 per contract, nearly double the amount at the beginning of the year. 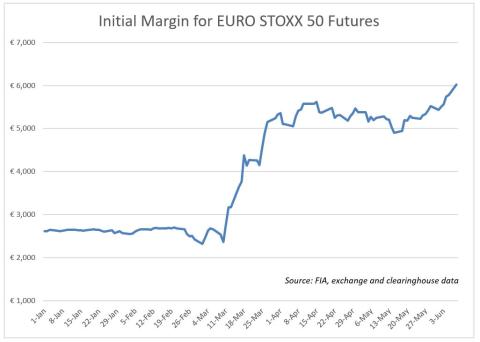 IM requirements for the Eurostoxx 50 futures, the most actively traded equity index futures in Europe, followed a similar pattern. From Jan. 1 through March 10, IM for this contract stayed within a range of 2,300 to 2,700 euros per contract. However, initial margin surged to more than 5,100 euros by March 27 and more than 5,600 euros by April 15. As with the E-mini S&P 500, the IM requirement doubled over less than a month. And it continues to rise; as of early June, Eurex Clearing had set the IM requirement at more than 6,000 euros per contract.

To take an example from the Asia-Pacific markets, the Nikkei 225 futures traded on the Japan Exchange Group saw a similar leap in initial margin requirements. However, the Japan Securities Clearing Corporation, the CCP that clears JPX trades, has been quicker to pull back. IM increased six times in March, more than doubling from 720,000 yen on March 2 to 1.62 million yen by March 30. However, starting April 7 there were six reductions in IM and by the beginning of June the initial margin was back under the 1 million mark.

As these three examples show, IM requirements at the per-contract level went up by 100% during March. But what about the overall impact on the market? One way to measure that is to look at the amount of money that customers held in their accounts at clearing firms, which is closely correlated to the initial margin requirements on their outstanding positions. Data published by the Commodity Futures Trading Commission, the primary regulator of derivatives markets in the US, shows that total customer funds in futures accounts stood at $214 billion at the end of February. One month later, that amount had risen to $318 billion, an increase of more than $100 billion in a single month.

Looking ahead, IM requirements may fall if markets become less volatile, but they are likely to remain elevated simply because of the way that margin models work. The tumultuous price movements of March are now in the past, but they will become part of the historical record used by the clearinghouses to estimate future price movements. The financial crisis of 2008 is now far enough removed from current market conditions that its influence on margin models has started to wane, but the "great lockdown" of 2020 will have a considerable influence on IM for many years to come.

Outlook 2021: lessons learned from 2020, insights from Washington, and clearing strategies for 2021