"Know your CCP" more important than ever as default management evolves

Recent regulatory actions show an increased focus on issues surrounding CCP recovery and resolution. And based on the EU's new CCP Recovery and Resolution regime, it seems that policymakers have provided national authorities and CCPs with adequate tools to manage a crisis while also balancing incentives for all participants to appropriately manage risk.

That was the key takeaway from a recent FIA webinar on the topic. Access a recording of the hour-long discussion here.

Unlike the approach to resolving a failing institution in the banking industry, "the normal toolbox doesn't quite work" in the resolution of a clearinghouse, said Damian Carolan, a partner at law firm Allen & Overy who helped lead the webinar. That's because banks are diverse businesses that can be split into good and bad businesses lines, and typically hold ever increasing amounts of regulatory capital. A clearinghouse functions as a risk management utility, rather than a risk-taking market participant, and it rarely holds significant equity or debt, meaning many elements of recent legislation around CCP recovery and resolution are "bespoke to CCPs."

The European Union recently finalized a framework for CCP recovery and resolution that provides the relevant authorities in the EU with broad tools and powers, including the ability to intervene when a CCP is in financial difficulty and restructure a failing CCP to preserve critical functions. The framework also requires CCPs to draw up and maintain recovery plans in case a loss exceeds its "waterfall" of default resources. At a high level, CCPs rely on two elements to cover losses after the resources of a defaulting firm have been exhausted -- their mutualized default fund from all other clearing members, and direct CCP capital known as "skin in the game" (SITG). 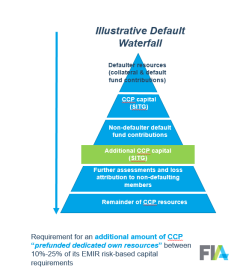 The EU CCP Recovery and Resolution Regime includes a requirement aimed at strengthening these resources by adding an additional layer of SITG in the default waterfall. This additional amount will be between 10% and 25% of a CCP's risk-based regulatory capital requirements under EMIR and will be available for use immediately after the default fund contributions from clearing members are exhausted but before the members are assessed for future obligations.

The EU regime also includes other provisions important for clearing members, including the fact that initial margin cannot be written down as part of a "bail in," and compensation to offset losses they incur in an effort to save a CCP.

Despite the introduction of this new framework, practices can vary widely from one CCP to the next, said Damian Carolan of Allen & Overy. That means both clearing members and their customers have an obligation to fully understand the particulars of how their clearinghouse may treat their activities in the event of a default.

"Know your clearinghouse," he said. "Clearinghouses are all slightly different. The way their rulebook operates and the way they apply powers all vary slightly. It's important to track these tools and see how they are implemented in detail."

Issues around CCP recovery and resolution continue to be hotly debated by the industry and regulators around the world.  The focus has been wide ranging from transparency and risk management in furtherance of resilience to loss allocation and compensation and application of resources in the default waterfalls . For instance, an August report from the International Monetary Fund and the World Bank highlighted uneven CCP standards in the United States.  In the absence of a bespoke CCP recovery and resolution regime that empowers regulators to deploy additional tools in the case of CCP distress, regulators, clearing members and customers are all relying on the powers given to the CCP in its rulebook as well as, importantly, the limitations on those powers.

Deborah North, a partner in Allen & Overy's New York office, noted that it remains unlikely that there will be a comprehensive, single federal regime for recovery and resolution of CCPs in the US anytime soon and that the status quo with involving multiple agencies and regulatory regimes will continue to apply. "There will continue to be a lot of pressure on the detail of the rulebooks and much debate over the specifics of individual clearinghouses," North said.  Additionally, the US Commodity Futures Trading Commission is currently reviewing comments to revised Part 190 bankruptcy regulations partially to reflect current thinking on clearinghouse recovery and resolution and modernize the insolvency framework for US DCOs. As proposed, the framework would generally require a bankruptcy trustee to defer to a DCO’s existing default rules, procedures, and recovery and wind-down plans.

For its part, FIA has tried to balance the needs of clearinghouses as well as clearing members and their clients in the debate over CCP recovery and resolution. The event of a default should be rare and hopefully the full suite of tools available won't have to be deployed, but it's important to proactively prepare for the worst to protect cleared derivatives markets, said FIA Associate General Counsel Mike Sorrell.

"FIA has pushed for changes which in our view reflect the realities of a CCP in crisis, and will better align the incentives and risks among CCPs and clearing members," Sorrell said. "And though we see room for further improvement, we're very pleased with the developments in regulation and CCP rules and look forward to further engagement with stakeholders on these important issues. Even though we don't always share the same viewpoints, we believe the industry has benefitted from the strong relationships between FIA and the CCPs and the clearing community, with thoughtful and frank dialogue."

How recent US political changes will affect derivatives markets