Washington D.C. is a city of contrasts. Lawyers, lobbyists and government officials live and work only blocks away from some of the poorest families in the country. The majority of the adult population has a college degree, yet according to the 2014 U.S. census, more than 20% of the 700,000 people living in the district are functionally illiterate.

Everybody Wins! DC is tackling this problem. The 22 year-old organization aims to nurture the next generation of readers by pairing elementary school students with working professionals from government agencies, corporations and other organizations in the Washington area. The heart of the program is its “power lunch” partnership with children in grades 1-5. Every week each student in the program meets with their mentors for an hour during lunchtime and together they read books out loud. The schools provide the space, Everybody Wins! DC provides the books and the staffing, and the mentors provide the encouragement. More than 1,000 children participate each year, and many partners stay together for years.

Everybody Wins! DC faces a steep challenge. More than 75% of the city's fourth graders are below grade level in reading. The problem is particularly acute in low-income areas of the city. That is why the organization focuses its efforts on working with Title I elementary schools, where more than 40% of the students come from low income families.

Molly Teas, the organization's executive director, said creating a routine is one of the keys to the program's success. By meeting the same person every week at the same time, the students in the program have an opportunity to develop a relationship with their mentors. That not only helps encourage reading, it also gives the children a window into another world and the inspiration to pursue their dreams.

“Combining reading with mentoring is where the power of the model comes in,” Teas said. “We're seeing that having an adult in their lives who is dependable and fun to be with builds their confidence and helps them find the joy in learning. When you look at the kids who beat the odds, they have someone in their life who gave them the confidence to be good readers.” 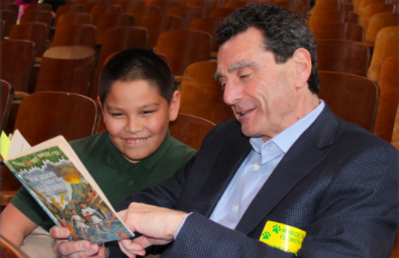 Futures industry lawyer Mark Young, pictured here reading to one of the children participating in Everybody Wins! DC, has volunteered with the organization for more than two decades.

Mark Young, a partner at the law firm of Skadden, Arps, Slate, Meagher & Flom, has been involved with Everybody Wins! DC for over two decades. Young is a prominent member of the derivatives bar and has many clients in the futures industry, yet he has found the time to be a mentor in the power lunch program for more than 20 years. He also is a long-standing member of the organization's board of directors and is now serving his second term as chairman.

Young cherishes the memories of the children he has met through the program. “When you see a child once a week, you become part of their life,” said Young. “You talk about your world and what you do, and they talk about their world and what they do. You read together, learn together and laugh together. Everybody Wins coordinates with the schools to take care of all of the arrangements for the students and provides the books. Our firm, Skadden, provides the transportation and even a boxed lunch for more than 30 reading mentors from our firm. There's not much I need to do but show up each week, but by doing so I am given the opportunity during that one hour a week to change someone's life.”

Everybody Wins! DC has strong support from numerous government agencies in Washington, including several that are connected to the derivatives industry. The Commodity Futures Trading Commission, for example, has several staffers currently involved as mentors at the Francis Stevens Elementary School, a few blocks away from the CFTC's offices. Past participants include several high-ranking CFTC officials, including former Commissioners Walt Lukken and Jill Sommers. Other supporting organizations include the Securities and Exchange Commission, the Marine Barracks located in southeast Washington, and more than 100 other businesses, think tanks, law firms and government agencies.

Sommers was a mentor for two young girls while she was at the CFTC and saw how much the experience inspired children to read. “It was really fulfilling to take some time out of the workday and read with those kids,” she said. “One of the girls I worked with was reading well below grade level and I could see the changes when she was exposed to more complex stories. The book we ended with was Charlotte's Web. I remember how excited she was each week as we read that book and how much it opened her imagination. That's really the whole point...to encourage a love of reading.”

One other remarkable thing about Everybody Wins! DC is that it is completely bipartisan. Starting with two of its founders, former Senators Jim Jeffords, a Republican from Vermont, and Paul Simon, a Democrat from Illinois, it has enjoyed the support of politicians from both sides of the aisle. Ray LaHood, a former Republican member of the House from Illinois and Secretary of Transportation, was a mentor for many years, as was Tom Harkin, a former Democratic member of the Senate from Iowa. Dozens of Congressional staff have participated in the program, and the current roster of mentors includes staff from the offices of Senators John Boozman, Thad Cochran, Mike Enzi, Patrick Leahy, Bernie Sanders and Chuck Schumer.

“They show up every week in their suits and uniforms,” said Teas. “These are busy professionals, but they make the time.”