European Commission official says Brussels will not wait until last minute to make its intentions known, but markets should prepare for all possible outcomes

Clarity and legal certainty over European Union equivalence for UK clearinghouses are needed by September to avoid a “cliff edge” that will drive up costs for EU financial firms and force UK CCPs to issue termination notices to their EU members, said panellists during FIA's webinar on Cross Border Clearing and Market Access on 8 July.

"There is a potential Brexit cliff edge as early as September this year due to the required lead time for UK CCPs to serve termination notices to EU clients," said Robbert Booij, chief executive officer, Europe at ABN AMRO Clearing.

"As a European clearing firm, it is extremely important to have access to UK clearinghouses as they act as the CCP for some of the world's most liquid markets. If we are cut off, the implications are severe."

Booij said that for EU firms a subsidiary would need to be established in the UK or in any other third country not in the EU to retain that access. "This could force European firms to terminate access to UK markets for their clients unless they are willing to absorb very punitive capital increases. Most firms will want to continue allowing access to UK markets, but probably can’t do it at all costs.”

He added, "European end clients could still access UK markets using UK and US banks, but this would be a serious disruption to the level playing field that should be considered." 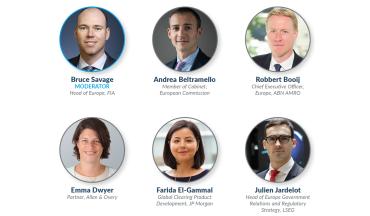 Julien Jardelot, head of Europe government relations and regulatory strategy at London Stock Exchange Group, which owns UK clearing house LCH Ltd, said, "What we see and what our EU clients are calling for is some form of legal certainty as soon as possible so that we know at least the next steps that we will have to take and to give us enough time to apply for recognition."

He said that LCH, which clears more than 90% of euro-denominated interest rate swaps, had seen no discernible shift in liquidity to the EU because clients do not want fragmentation in liquidity. "One of the important points to keep in mind is that you don't transfer positions like that. You would have to close down entire portfolios and try to reopen and find a counterpart on the other side and pray for liquidity."

He added, "Our customers' messages are clear that they want to be able to continue access to LCH services post-Brexit as they benefit from having a diversified liquidity pool and diverse supply and demand."

"We believe strongly in the importance of globally integrated markets and the efficacy of those markets…and we don't want to see a further concentration of clearing service providers. We think that would be a very real risk with the contraction of the ability of EU members to retain their membership in UK CCPs. We want healthy competition and customer choice in this space."

As Emma Dwyer, partner at law firm Allen & Overy, noted, the UK left the EU in January but complies with the bloc’s rules until the end of December in return for continued full access for financial firms. After this transition period, access to UK CCPs by firms in the EU will depend on whether Brussels deems UK regulation to be equivalent to standards in the bloc.

The EU and the UK agreed last year they would make “best endeavours” to complete equivalent assessments by 30 June but missed the deadline with both sides blaming the other.

Speaking on the panel, Andrea Beltramello, member of cabinet at the European Commission, said that the EU's equivalence decisions are unilateral and not part of the ongoing Brexit negotiations.

"We have to be mindful when we carry out assessments of the interconnectedness between the EU and the UK and the implications for financial stability. We also need to keep in mind that the UK has stated an intention to diverge from the EU's regulatory and supervisory framework, which is legitimate, but we cannot carry out assessments based on what the situation is today," he said.

"We need to have a forward-looking approach and a good understanding of the intentions the UK has in terms of the future of its financial regulation."

He added that the UK had so far answered four of 28 questionnaires sent by the Commission seeking information about UK regulation of the financial services industry after the Brexit transition period, which meant the Commission had been unable to fulfil its best endeavour to conclude equivalence assessments by 30 June.

"Having said that, we are continuing to assess equivalence as we receive responses from the UK. This is an ongoing process and when we have all the elements we need we will take decisions in certain areas."

Asked whether the Commission is considering granting temporary equivalence to UK CCPs and when it will inform market participants of its decision, Beltramello said it would not wait until the last minute to make its intentions known, but that markets should prepare for all possible outcomes.

He noted that when the Commission renewed its temporary equivalence decision in November last year it was not a long-term solution. “The idea was that we would use the 12 months to December of this year to give enough time for the new EMIR 2.2 rules and framework to come into place… which will allow us to better supervise third country CCPs," he said.

"Everything is going according to plan and we are finalising the work on the [EMIR 2.2] delegated acts. It is important to stress, however, that we renewed the equivalence decision last year under the old rules. Now we are under new rules, so we are not renewing the decision, we will be taking a new decision in the context of the new rules… We are very mindful of the situation and we will take the steps that are necessary to deal with financial stability risks."

Bruce Savage, head of Europe at FIA and moderator of the panel, congratulated the Commission for its pragmatic approach in the proposed EMIR 2.2 delegated acts on tiering and comparable compliance and said he was pleased to see that many of the industry’s comments to the ESMA technical advice had been taken into account.

While Beltramello acknowledged that there had been a longer-than-expected wait, he said it was more important to get the delegated acts right than to rush putting them out for final consultation.

"We took more time than maybe was expected by the market. We are now finalising the consultation and because we have listened to what the industry had to say before we put them out for consultation, we do not expect to receive fundamental criticism – more questions of clarification and some targeted adjustments," he said.

"They then have to be transmitted to the European Parliament and the Council, but they also share the sense of urgency that the Commission has to put in place all the relevant tools. After that, once they are published in the Official Journal of the European Union, they can immediately enter into force. This means ESMA will immediately have all the powers required for tiering, to recognise CCPs and assess comparable compliance. I expect this process to be smooth and swift," he said.

A recording of the webinar can be accessed here.

Complying with cybersecurity regulations in an increasing threat environment

Black Americans who broke through barriers in finance