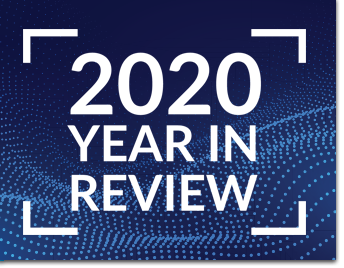 In 2020, the global cleared derivatives markets underwent an extraordinary real-world stress test as record-breaking volume and volatility prompted by the COVID-19 pandemic created disruptions to normal operations. All of FIA's members should take great pride in the role they each played, individually and collectively, to ensure that our markets remained resilient in the face of unprecedented events. 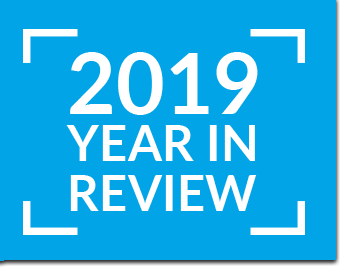 The 2019 Year in Review looks back at FIA's work as the voice of the listed and cleared derivatives industry across the key issues, including operational efficiency, clearing, trading, capital, default management, cross-border regulatory equivalence, market fragmentation, and Brexit. In addition to these topics, FIA strives to nurture the next generation of technology and talent to ensure our industry continues to thrive. All of our events feature and promote innovation and emerging technologies, culminating with our annual Innovators Pavilion competition and Innovator of the Year award at Expo. FIA also supports leveraging more of the talent pool among underrepresented groups with the launch of a board-led Diversity and Inclusion Initiative. 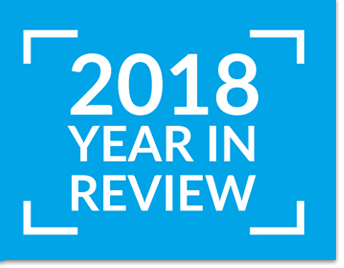 The 2018 Year in Review details the work we did last year on behalf of our members and the industry as a whole to help cleared derivatives markets thrive. In 2018, we expanded the resources we offer our membership and we are helping market participants address the challenge of meeting new regulatory requirements. At FIA, our mission is to foster open, transparent and competitive markets; to protect and enhance the integrity of the financial system; and to promote high standards of professional conduct. This mission drives everything we do on behalf of the 330 companies around the world that make up our membership. 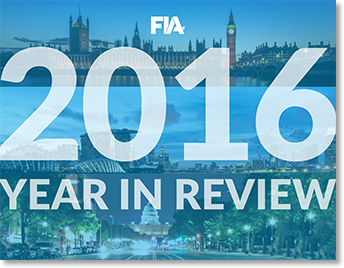 2016 marked FIA’s first year as a fully merged, global organization. Key issues in this global space continued to be capital requirements and the leverage ratio as well as MiFID II implementation. FIA fostered stronger relationships with key regulators in the Asia-Pacific region while regularly advocating before the U.S. Congress, European Commission and other regulatory bodies. FIA continued to promote healthy, safe and competitive markets through disaster preparedness exercises and a stronger focus on fintech innovations. We continue to engage our members and the broader global cleared derivatives community through our major conferences, local events and webinars. 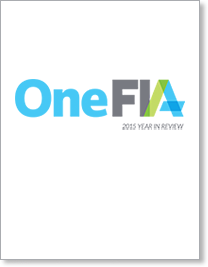 2015 was a landmark year for FIA. Our organization merged into a single, global organization with FIA Europe and FIA Asia to provide our industry with a coordinated voice on international issues. During the year, FIA was particularly engaged on capital requirements, segregation and the leverage ratio and their unintended effects on the clearing model. FIA also proactively addressed risk recovery and resolution at clearinghouses. 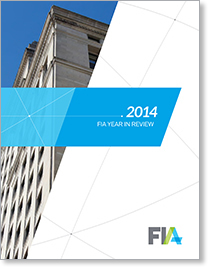 2014 was marked by tremendous change in the market structure and regulation of futures, options and cleared derivatives globally. This was the year in which the rulewriting phase of Dodd-Frank largely concluded and the reality and cost of implementation were felt in earnest. In Europe and Asia, the rule-writing phase is still underway but significant cross-border differences are beginning to emerge. 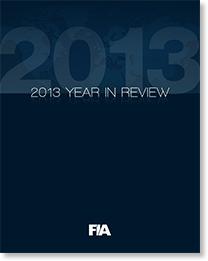 During 2013 much of the focus at FIA was on the global challenges our markets face as new financial reforms are implemented. One of the highlights of 2013 was the creation of FIA Global, which unites FIA, FIA Europe and FIA Asia under a single global structure. Also at the top of last years’ policy agenda was strengthening the protections afforded to customers in our markets. 2013 also saw record attendance at FIA’s conferences and events. 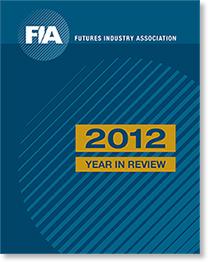 2012 was a very busy year for the FIA, with continuing Dodd-Frank implementation, association expansion, and a variety of conferences. Dodd-Frank kept FIA regularly working with Congress and the Commodity Futures Trading Commission, as well as reaching out to the financial industry to respond to regulatory and legislative initiatives. Our staff grew larger, domestically and internationally, new members joined the organization, and we expanded our yearly conferences.

November 2021 stats on customer funds held at US FCMs